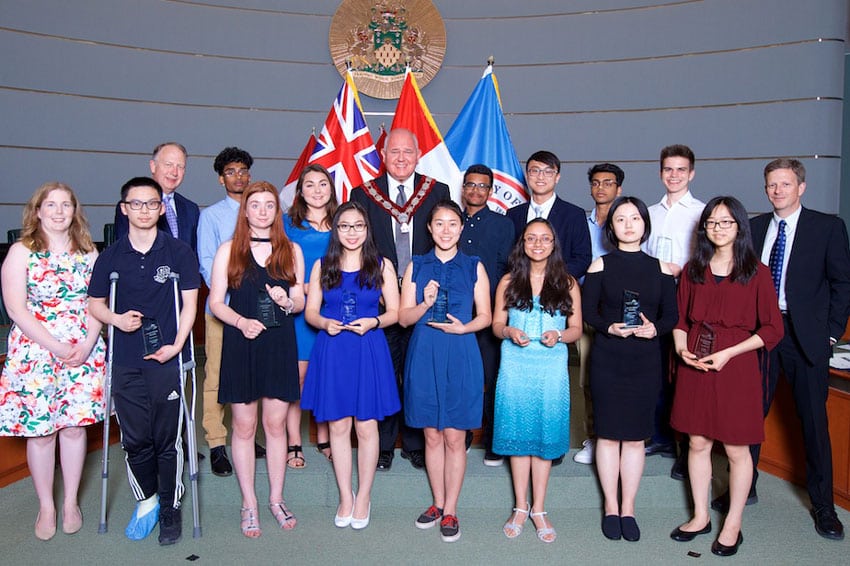 On May 28, the City of Markham recognized noteworthy individuals, groups and organizations that are helping better the community.

Those recognized include 100 Women Who Care co-founders Michelle Hale, Misti Holmes, Melissa Seguin and Rachael Streek-Buma. Since 2015, the Markham chapter has raised more than $100,000 for local charities.

Taiwan Entrepreneurs Society Toronto, which for 25 years, has made significant contributions locally, provincially and nationally.

The Whittamore family, for opening their farm to the public for more than 60 years. For hundreds of thousands of families across the GTA, a visit to the site was part of their summer. The Whittamores ended the public visits last year, after six decades, they decided it was time for a break.

Piper Giles and Paul Pourier: ice dancers at the 2018 Winter Olympics at PyeongChang.

Part of the program was also dedicated to Markham District Energy honouring environmental leaders from Markham high school graduating classes. The students were selected for their commitment to the sciences in school and to the environment in their volunteer time. Since their 10th anniversary in 2010, the local utility has offered 14 bursaries (one for each of Markham’s high schools) in an effort to support tomorrow’s environmental leaders and advocates. The $1,000 bursary is intended to be applied directly toward first-year educational expenses at a Canadian post-secondary institution.

While most of the students say they plan on enrolling in environment studies or sciences courses at a post-secondary school this fall, notably, Jeyasanthan is taking a different route to becoming a leader in helping green the planet. As part of his school’s specialist high-skills major environment program, he participated in the Milliken Mills pond restoration and maintenance of its living wall, as well as planting trees near the Pickering Airport lands to create a wildlife corridor. This fall, he’s off to college to study landscaping.