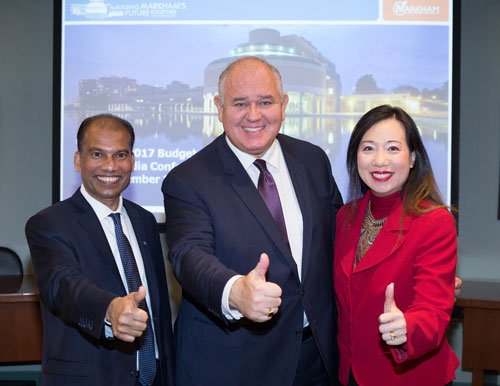 “Markham’s record of fiscal leadership is recognized among municipalities in Ontario,” said Mayor Frank Scarpitti. “We continue to keep our tax rates low at the same time as we are making prudent investments in infrastructure to ensure sufficient funding to address the future rehabilitation and replacement of assets for the next 25 years. Unfortunately, the benefits of our budget have been undermined by last night’s Toronto Council decision on road tolls.”

Using road tolls to finance Toronto’s transportation infrastructure places an unfair tax on Markham commuters. The annual cost of proposed Toronto tolls for Markham commuters is estimated at $1,200 a year per vehicle. The financial impact of this road toll is greater than the total property tax increases over the last several decades in Markham, or equivalent to Markham’s current portion of property tax for the average homeowner.

“When we had our first budget committee meeting, City staff were asked to identify efficiencies and mitigating strategies to deliver a budget that is realistic, fiscally responsible and continues to effectively address the diverse needs of our growing community,” said Budget Chief Councillor Logan Kanapathi. “Markham’s nine-year budget record has shown municipal leadership in minimizing the impact of tax rates on families and household budgets during challenging economic times. At the same time we are continuing to invest in important local community infrastructure such as the new community centre and library in southeast Markham and many new parks.”

“Our strategic approach to future planning coupled with prudent management by Council and staff means that Markham is in a strong and sustainable financial position,” said Budget Vice-Chair Councillor Amanda Collucci. “At the same time, our 2017 budget commits over $12 million for the construction of 92 acres of parkland for 16 new parks, $10 million for continuation of our city-wide flood control program, $5 million for safety requirements on the Stouffville GO line as part of the whistle cessation program, and investments in our multi-use pathways.”

Markham collects property taxes on behalf of York Region and the Province of Ontario, with 51 per cent of all Markham taxes going to York Region. The City of Markham retains about 25 per cent of the taxes collected with the remaining 24 per cent going to the Province for education.

“We have remained focused on the sustainability of our community through investments which encourage economic prosperity, create a vibrant social and cultural experience and enhance our natural environment,” said Mayor Scarpitti. “Keeping tax rates low, while making wise infrastructure and service investments positions Markham as a highly desirable destination.”