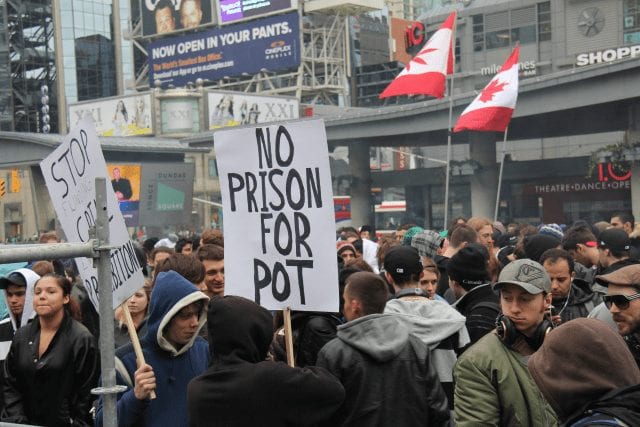 Despite a promise by the federal government to legalize marijuana for recreational use, police had a warning for those who wished to celebrate 4/20 in April: pot possession is still a crime.

Cannabis activists from around the globe observe 4/20 on Apr. 20, an annual tradition usually marked by participants lighting up at 4:20pm.

Participants are likely to be particularly optimistic this year, with a federal government that heavily campaigned last fall to not only decriminalize, but legalize marijuana.

Until those changes happen, however, a York Regional Police spokesperson said that officers will have a zero tolerance policy for possession.

“We enforce the laws that are set out, and those laws haven’t changed,” said Cst. Andy Pattenden. “When the laws change, then our enforcement changes. But at this point in time…our enforcement level is the same, (our) type of enforcement is the same, and if we do catch anybody in possession of or using any illegal drugs, they will be charged.”

Though medicinal marijuana is legal in Canada for those with a prescription, unlawful possession can carry a prison sentence of up to five years less a day. For those growing pot plants with the intent of trafficking, a mandatory minimum sentence of six months in jail applies.

In the coming months, the Liberal government is expected to roll out more details of its task force on marijuana, spearheaded by member of parliament and former Toronto police chief Bill Blair.

The government hasn’t laid out any timeline yet, but Blair did say that the process will involve federal, provincial and territorial stakeholders.

Pattenden said he wasn’t aware of any announced involvement by YRP yet, but noted that other law enforcement groups, including the Ontario Association of Chiefs of Police, have consulted with the government on the matter.

Markham—Stouffville MP Jane Philpott, who also serves as Canada’s health minister, reiterated her government’s intent to legalize, but noted it was not an issue to be rushed.

“Our government’s commitment to legalizing, regulating and restricting access to recreational marijuana is one that must be done with great care and consideration,” said Philpott.

“The task force will include perspectives from many different sectors, including health, justice, law enforcement and public safety. I expect that we will need to work with specialists in areas like addiction and mental health as well.”

Blair said in a statement earlier this year that there isn’t any discussion of pardons or amnesty for those charged with marijuana possession before any changes in the law take place, reminding people to follow existing laws.

Despite that warning, a number of new pot dispensaries have opened—operating illegally or in murky territory—since the Trudeau government took office.

For local police, it’s business as usual, however.

“Our officers will be out—front line officers—doing what they do everyday, and that’s keeping an eye on everybody,” said Pattenden. “If they find anybody in possession of or using any illegal substances, they can potentially face charges.”

Philpott said that more information will be unveiled in the near future, as the task force takes form and lays out clearer direction.

“I am looking forward to sharing more information as our government moves forward with this initiative,” she said.