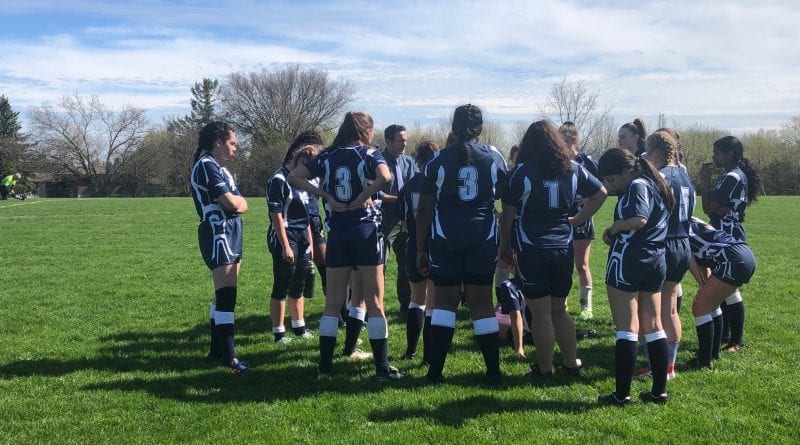 It’s one thing to think about tackling another person.

Going out there and using your body to do it, though, is a bit more of a challenge.

The Markham District Marauders girls rugby team has gotten into the head space of doing so as they play through their York Region Athletic Association (YRAA) season.

“We have a lot of new girls and they’ve really stepped up this year,” said veteran Marauder Megan Seed, who plays outside of school for the Ajax Wanderers as well.

She has long since gone through the experience of stepping up and making a play on the rugby pitch.

“It’s just about the mindset,” Seed said. “Not being afraid of being able to go in and tackle people and actually throw your body into the game. It takes a bit.

“You’ve got to tell your mind to shut up and do it, I guess.”

Coach Mark Sewell tries to prepare his team, particularly the newbies, to do so, but at the end of the day, it’s about getting comfortable with the idea of giving or taking a hit.

“It’s about a little bit of courage and a little bit of experience,” Sewell said. “I think finding the courage to tackle and be tackled is the number one thing for new players to discover. It’s nerve-wracking, but once they try it and have had success, it gets a little easier from then on.”

With a group that spans four years of high school, the Marauders all find their stride at different points.

“It really varies for everyone,” Sewell said. “Some people are just starting to play and are figuring things out, and some have been playing for four years. The seniors are really helping the juniors come along and as a result, different kids will make different numbers of mistakes.”

When it comes to rugby, there is a lot to take in, between the rules and fundamentals involved, which are a fair bit different than many of the other sports the Markham District athletes play.

It makes it all the more critical for the Marauders to try and gain as much knowledge of the sport as they can before stepping onto the field.

“Well, if they’re not familiar with the game, then there are a ton of intricacies,” Sewell said. “We teach them the basics of the game and the other unusual circumstances they’ll figure out on the fly.”

With 15 players on the pitch at a time, it’s imperative that they all be working together in order to find success.

“It’s everything,” Seed said. “If you have one person that doesn’t understand anything, it’ll throw everything off. If they break through that one tackle, they can go in and get the try.

“It’s important to work together and support the other person.”

Although you will see backs go streaking down the sideline from time to time on a long score, even that won’t come solely from a single athlete’s effort.

“It’s fundamental,” Sewell said. “One player can’t do it by themselves in rugby. Communication and working as a group is critically important.”

For Markham District, that cohesion and dynamic plays its part off the field too, with the veterans being empowered to make key decisions for the squad.

“I try and leave a lot to the senior players, a lot of responsibility for organizing the team,” Sewell said. “I like to defer to them a lot and I find that they rise to the occasion. They can accomplish a lot of stuff if we let them, so I try to do that as much as I can.

“For example, I don’t pick a captain,” Sewell added. “The captain is whoever the kids follow. They pick the captain, not through a vote or something, just through the behaviour. So I let the kids take care of some of those things and they do a good job of that.”

Seed has shown her ability as a leader, and uses that to help focus on the positives for her teammates.

“I like to look at everything that everyone has done and how they’ve grown,” Seed said. “We have one girl that hadn’t tackled before, ever, and this year, she’s made tackles. I look at her and it’s like, ‘you did it’, and it’s because we’re looking at the bright side.”