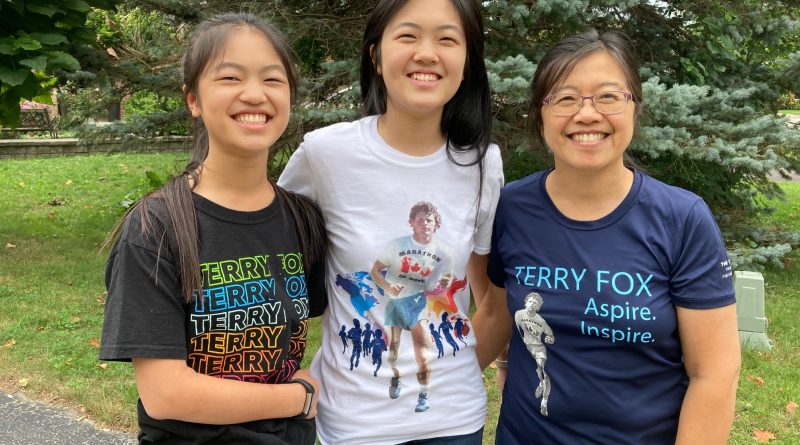 On April 12th, 1980, Terry Fox dipped his artificial leg into the Atlantic Ocean near St. John’s, Newfoundland and began his Marathon of Hope. He planned to run across Canada to raise money and awareness for cancer research. Every day, for 143 days, he ran the equivalent of a full marathon. After 5,373 km, he was forced to stop his run in Thunder Bay due to cancer returning, this time to his lungs. Fox asked that each Canadian just give a loonie and to keep going when he couldn’t.

The recent Terry Fox run momentum was felt across the country in the weeks leading up to the September 20 event day. The City of Markham got into the spirit too showcasing Marathon of Hope banners on Town Centre Blvd, as well as a special centre ice logo honouring Terry Fox at the Angus Glen and Thornhill arenas.

Due to COVID, this year’s event moved online, but many residents still participated in the event – they walked, ran, or biked a route of their choosing in their neighbourhood. The weather cooperated, and it was a beautiful day to be out. A few enthusiastic people kept up with tradition and showed up at the Markham-Unionville run site at Toogood Pond dressed in past Terry Fox T-shirts and continued as normal to raise money for cancer research. It was great to see families carrying on and passing the torch to younger family members. The battle for normalcy in these unusual times provides hope that things will eventually get back to what we were accustomed to.

“It has been a different year and not quite the celebration that we envisioned last year when we started planning for the 40th anniversary,” said local run organizer Lilly Ing. “However, everyone has helped immensely to spread the word and bring Markham-Unionville’s fundraising total to just under $50,000. It is heartwarming to see people responding to the challenges and continuing Terry’s Legacy.”

You can still help the Terry Fox Foundation raise money for cancer research by registering online at www.terryfox.ca/terryfoxrun/markham-unionville.