Police have released images and a video as part of their search for a man wanted in connection with several break and enters at a Buddhist temple near Bayview Ave. north of Steeles Ave. between Nov. 8 and Nov. 26. 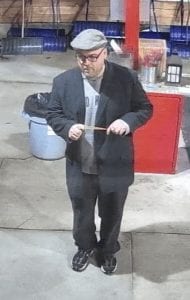 On at least four separate occasions, the suspect broke in and stole cash from donation bins say York Regional Police. The suspect is described as white, in his late 30s to 40s and wearing black-framed glasses. A surveillance video can be viewed at youtu.be/to2n2Z57R8Y.