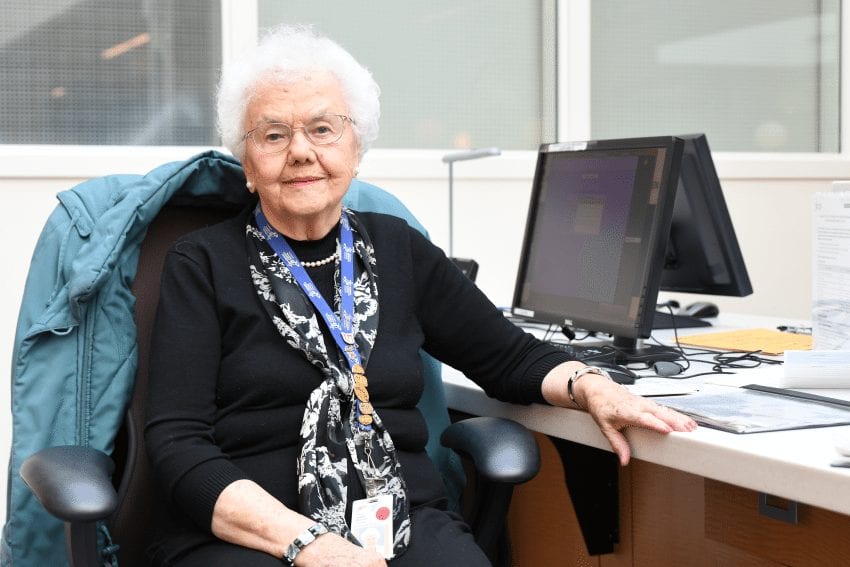 As she celebrates her 100th birthday on May 15th, Audrey Johnstone is not slowing down. Johnstone has been volunteering with Markham Stouffville Hospital (MSH) since October 1989. She started even before the hospital officially opened its doors. As an information desk volunteer, she is one of the first people that patients and visitors rely on.

Prior to the hospital’s opening in March 1990, Johnstone was involved with the foundation’s $5 million capital campaign where she assisted with fundraising activities. Johnstone also assists with the Community Resources’ Code Orange Call and Fan out List where she has been trained to assist the hospital in the event of an external disaster.

“I like volunteering, being a part of the community and giving back,” she said. Johnstone is grateful to have seen both the opening of the original hospital as well as the expansion and opening of the new wing in March 2013. Throughout the expansion and renovations, she never missed a shift, always kept a positive attitude and embraced the change with doubling the size of the hospital.

Her commitment and dedication have not gone unnoticed. She has been previously awarded as a Markham Stouffville Hospital Hero, awarded by patients and their family to recognize an individual at the hospital who provides excellent care and consistently goes above and beyond to enhance the patient experience. She was also a previous Mayor’s Senior Hall of Fame nominee in 2013, awarded to a Markham resident 60 years of age or older who has made an outstanding volunteer contribution to the Markham community.

Johnstone is an example of how community involvement keeps one active and engaged.