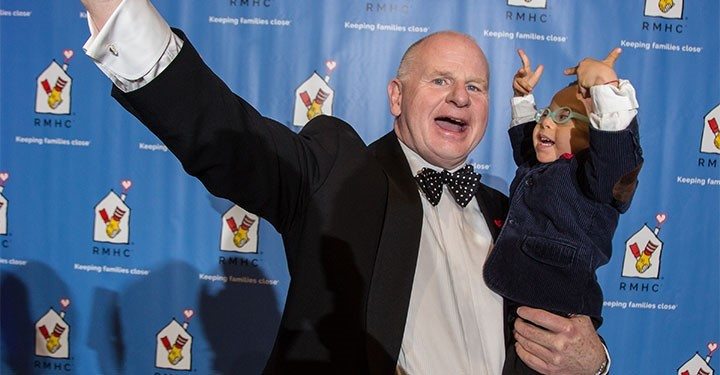 Ronald McDonald House Charities (RMHC), a global nonprofit that creates, finds and supports programs that directly improve the health and well-being of children and their families around the world, presented the Gerry Newman McTLC Award of Excellence to Marcia and Todd at a gala event in Illinois in November. The award carries with it a gift of $100,000 (USD), to be contributed to the children’s charity of the recipient’s choice. Marcia and Todd have announced they will donate the $100,000 to RMHC Toronto to benefit even more families receiving hospital care in the GTA in the future. The gift represents the equivalent of supporting two families for an entire year at RMHC Toronto.

“The impact that Marcia and Todd have had on children and families in their community is inspiring,” said Sheila Musolino, President and Chief Executive Officer, RMHC. “It is an honour to celebrate the extraordinary work they have done to help hundreds of thousands of Canadian families with seriously ill children.”

Throughout Marcia and Todd’s career with McDonald’s, they have worked to promote and raise money for RMHC in Canada, including through McHappy Day, an annual McDonald’s fundraiser benefitting the charity, and by generating community support for the Ronald McDonald House Charities Toronto Family Room at Markham Stouffville Hospital.

Over the last three years, the Finlaysons, together with community leader Roger Keeley, brought together 15 local business leaders to become advocates for RMHC Toronto. This community fundraising team developed the “McHappy Day Ambassador Program,” recruiting close to 100 local leaders through peer-to-peer networking. The Ambassador Program raised more than $90,000 in 2017 for the Ronald McDonald Family Room at Markham Stouffville Hospital, more than double the fundraising goal. The Family Room supports more than 400 York Region families each year whose child is being cared for in the pediatrics or neonatal intensive care units.

“We accept this award on behalf of the tremendous Markham Stouffville fundraising team lead by Roger Keeley and the York Region residents that contribute to our fundraising success through our McHappy Day events, Happy Meal program and coin box program. We are thrilled that this $100,000 will go to benefit families of children who use the Markham Stouffville hospital,” said Todd Finlayson. “We are thrilled to be the first Canadian recipients of this annual, international award in over 30 years of its existence. To be selected as a single winner from our global system is a little overwhelming, to say the least.”

The Gerry Newman McTLC Award of Excellence from RMHC honours the charity’s Founding Mission Partner, McDonald’s, and the dedication of the charity’s first President, Gerry Newman. The award is given annually to Owner/Operators who have stood out among all others for their efforts on behalf of children.

Photo: Todd Finlayson poses with one of the many children who has been helped by the RMHC.