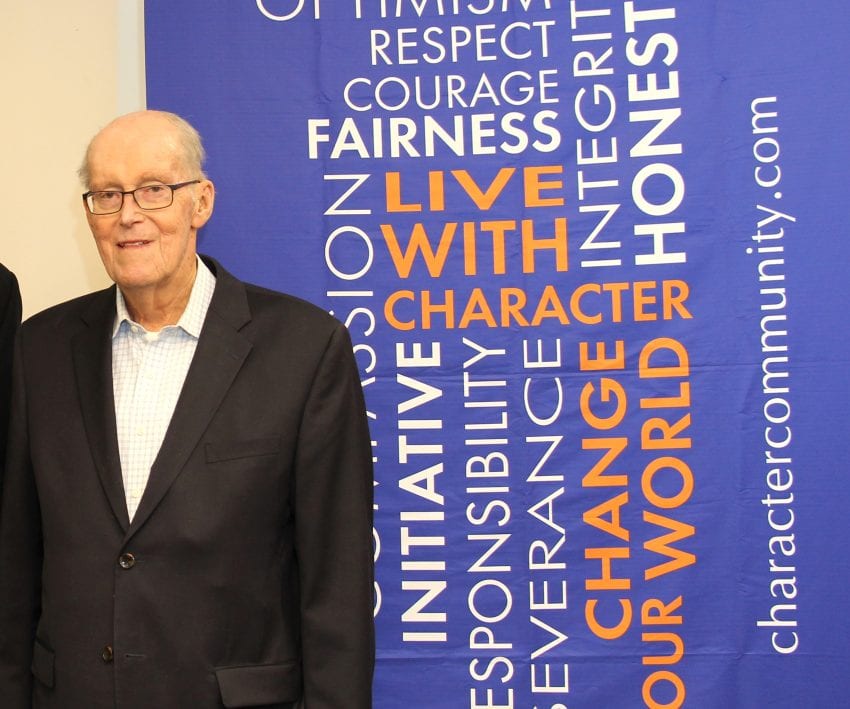 The idea that York Region could become a Character Community was born at an international Quest for Character Symposium hosted in April 2001 by the York Region District School Board.

As a result of that symposium, Don Cousens (Markham mayor at that time)  took on the challenge to host a forum about building cities of character.

In 2002, York Regional Council approved a resolution declaring York Region to be a Character Community,  the first regional municipality to do so in Canada. That same year, the 11 character attributes were chosen.

Cousens, who passed away recently, will be highlighted as one of our community’s true leaders at the 2017 character awards event.

“Donald Cousens had been instrumental not only in the establishment of our Foundation, but also in the continued development and ongoing expansion of our profile across York Region. His unwavering support, wisdom and guidance was invaluable to us and we will again honour his endeavours at our upcoming awards celebration on April 26,” said CCFYR executive director Karen Addison. “His optimism, his courage and his perseverance were an inspiration to us all.”

This evening showcases those who strive to live with character, where they live, learn, work and play.

Addison said that they received 140 nominations this year with over 25 per cent coming from Markham.

YRCC has shared the following highlights of a few local nominees for this year’s awards event:

He embodies the qualities of initiative, perseverance, and responsibility. He has been a part of the St. Anthony school community for more than 15 years and has always given freely of his time, talents and efforts.

He served as co-chair of the school council for three years and was an important part of the team of parents who saved St. Anthony from closure in 2009. The following year, he co-founded St. Anthony’s LEAP (learning enrichment afterschool program) which provides high quality after school programs to both St. Anthony students and other children in the community. He continues to work with a group of volunteer parents who run this not-for-profit operation, providing parents and children with an outstanding option for after school care and opportunities.

He saw a need to support Youth in Music in our community. His goal is to provide young artists with an opportunity to showcase their talents. Pop-up performances with youth happen throughout the year with Jamie’s guidance and support. This gives young people confidence and encouragement to achieve their dreams.  Compassion, the second part of the Youth in Music Program in conjunction with the Arts Music Store, provide youth in our community that cannot afford a musical instrument or lessons. With the partnership, youth can pursue their interest in music and remove the financial barrier to participation.

S.H.A.R.P. (Students Honing Abilities and Recognizing their Potential) is an after-school program developed by Across U-hub, focusing on self-discovery, peer relationship and leadership development for high school students of East Asian immigrant descent. Since our pilot program in 2014, over 170 students go through different multi-media activities including, but not limited to, experiential learning, reflection and introspection, mentorship, community-based outreach activities, cultural exploration and volunteer training. Through S.H.A.R.P., students grow to be citizens of character  who can work with others in a team and who make meaningful contributions to the community.

Inclusiveness – She  invites community members throughout York Region to all the GetRecD events. Once someone attends an event, they often  return to another event, as they feel they are part of the GetRecD family.  Sadly, many of the patients Laura and GetRecD support pass away, leaving loved ones behind. She builds a very close relationship with the patients and their family, and remains  in contact with them to ensure they are doing well.

Through her positive attitude and welcoming smile, she works to create an inclusive culture, one interaction at a time. As a committed volunteer at Across U-hub for the past four years, Fok faithfully leads the Promotion Team, providing a supportive environment, experiential learning opportunities, and work responsibilities in the area of marketing/promotions.  Youth have respect for her as a big sister and are challenged to contribute with a sense of responsibility and respect, because of her mentorship.