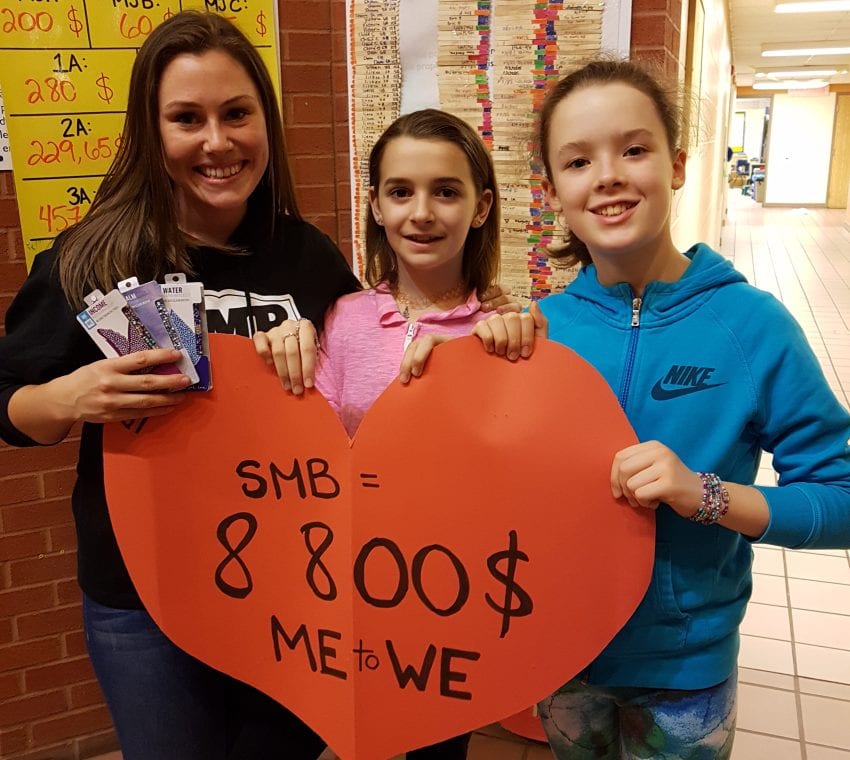 A little bit of heart goes a long way.

In early March, the students at the French Catholic Elementary School of Sainte-Marguerite-Bourgeoys (SMB) celebrated a remarkable fundraising achievement and demonstrated that to make a positive impact on the world, age is no obstacle.

The month of February symbolizes love at SMB. When the grade 6 students begun learning about charities and not-for-profit organizations as part of their social studies class, their teacher Ms. Jennifer Benoit saw it as an opportunity.  “I wanted the students to see that love can stretch far beyond our immediate circle and change the lives of people less fortunate than ourselves,” said Benoit.

She challenged the class to organize a school fundraiser with the goal of raising $1000.  Together the class researched various organizations and settled on joining the ME to WE movement to help families in Kenya.  The fundraiser was to have two goals.  First, collecting direct cash donations to purchase school kits for Kenyan children, thereby removing the most common obstacle to education.

Second, selling bracelets known as rafikis (which means friends in Swahili) made by women in Kenya.  These beaded pieces of jewellery come in five colours, each of which represents a different development pillar:  water (blue), food (green), income (purple), education (orange), and health (red).

To help the class reach its fundraising goal, parents reached out to the community and asked for prize donations to provide further incentive within the school.

Generous donors, including Pizza Pizza, the Dollar Store and Shoppers Drug Mart (from the Cache Plaza, Markham), as well as Baskin Robbins (Hwy 7 and  McCowan Rd.), provided the food and supplies for the class who raised the most funds to have a lunchtime party.

For the students who sold the most rafikis, sponsors like Loblaws, Mastermind, Kelsey’s (Hwy 7 and Leslie) and DeSerres, provided individual prizes such as toys, gift certificates and art supplies.

The parents involved in this effort are grateful to all the donors for their generous contributions, as the participation of the local business community was an important element to the project’s success, noted Sandy Lancelot, one of the parents who helped acquire donations.

A laminate chart placed at the front of the school kept tally of the daily funds coming in, and next to it, a financial thermometer kept track of the rafikis sold. Each time a student sold a bracelet, their name would be written on a Popsicle stick, and the end of the stick would be coloured to match the bracelet.

A total of 700 rafikis were sold ($7,000) and $1,800 in cash donations allowed for 72 school kits to be purchased by the school.  On March 3, the students at SMB celebrated their accomplishment.

Photo: (L:R) Teacher Mme Jennifer Benoit with Grade 6 students Chloé McCoy and Morgan Lock. The students were two of the top fundraisers during SMB’s recent Me to We fundraising event.