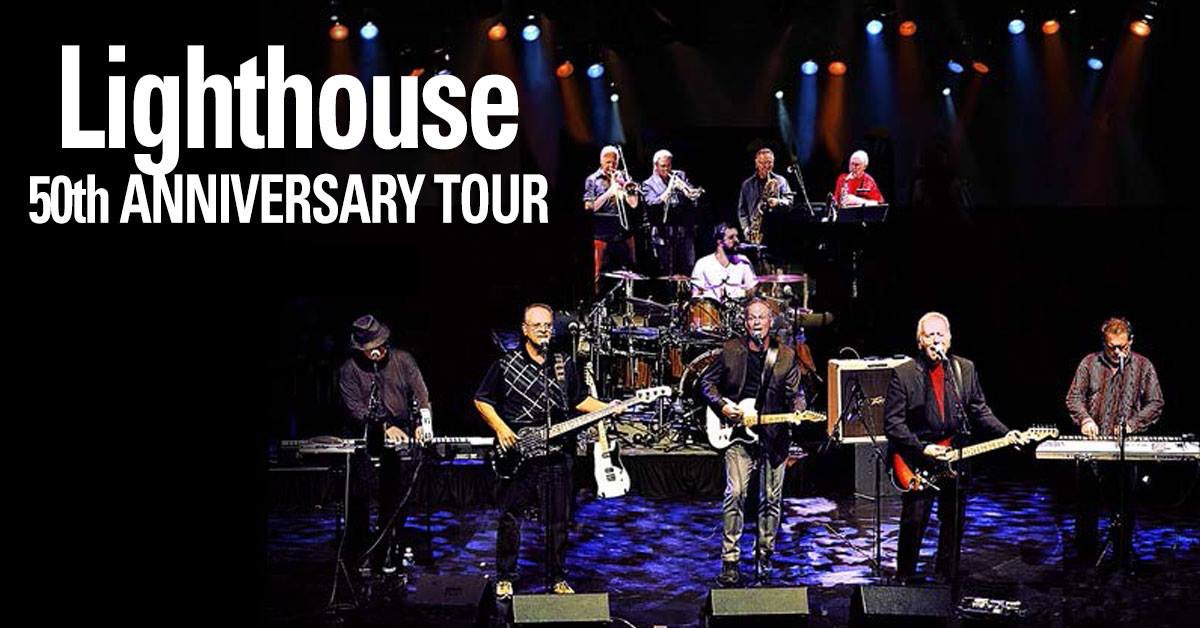 Many of the world’s most well-known music acts have been turning 50 recently. The Rolling Stones, The Who and even The Beatles have all found renewed interest and vigor from celebrating a half-century of music making. Although it might seem a peculiar milestone, 50 years in the mainstream for expressing rebellious attitudes, it is at least culturally significant to enjoy continued success five decades into a career of creation.

Formed in 1969, Lighthouse was Canada’s first progressive rock band, which is to say they added horn sections and strings to the lineup and true contemporaries of those mentioned above. While they famously turned down a gig at Woodstock in 1969, they did become regulars at the legendary Fillmore East in Lower Manhattan in its heyday and took the gig at The Isle of Wight Festival alongside The Who, Miles Davis, Joni Mitchell, Chicago and The Doors.

Today they find themselves as they always have, politely but persistently, and thus in true Canadian fashion, making their music heard for a 50th-anniversary celebration this year. And, it all starts in Markham on Jan. 17.

“Today it seems unreal, but at the time it seemed just, sort of … real,” says Lighthouse co-founder, Paul Hoffert. “We were just lucky to be around in the right era.”

The group’s origin is tied to Canada’s first great exporting of performance talent to the U.S. via New York City in the late 1960s and early 1970s.

“There was a great advantage we had as Canadians over Americans,” explains Hoffert. “We had a national broadcaster (the CBC) with a mandate to present Canadian work. As a result, we ended up with a government-funded training school in how to be creative.”

For many artists of the time, including Hoffert, future bandmate Howard Shore and their mutual friend Lorne Michaels, success at the CBC led to work south of the border because they were simply more skilled than their American counterparts.

In fact, Lighthouse was formed after a chance meeting between founders Skip Prokup and Hoffert on a flight from New York. Drummer Prokup was presiding over the dissolution of his successful pop group, The Paupers, while Hoffert was working on an Off-Broadway show writing music and playing keyboards.

Inspired by their the desire to expand what rock ‘n’ roll was capable of, the pair built what amounts to a small orchestra around a tight, rocking rhythm section. The blend of rock, jazz and classical it created made them innovators and trendsetters in music. Lighthouse was the first Canadian rock band asked to headline the Newport, Monterey and Boston Globe Jazz Festivals, the first to perform with Symphony Orchestras and the first to collaborate with a Classical Ballet Company.

“We loved movies, we loved movie scores,” said Hoffert. “Our goal was to make huge, orchestral rock ‘n’ roll music, but also be able to play it live.”

Between 1970 and 1974 they were awarded four Junos, four gold albums and Canada’s first platinum album for Lighthouse Live! while hits such as One Fine Morning, Sunny Days, Hats Off to the Stranger, 1849 and Pretty Lady went to the top of Canadian and International charts. At home in Toronto, the band’s free concerts at Nathan Phillip’s Square attracted 100,000 people.

In their first decade, Lighthouse often toured for up to three hundred days a year. That included across North America, Europe and Asia, but with a particular emphasis on concerts in cities, towns and small hamlets of every province in Canada who might not otherwise get a chance to host a major rock show. They truly became Canada’s band. It would be hard to find a Canadian of concert going-age in the 1970s who didn’t see them live.

Naturally, this gruelling schedule took it’s toll and led the band to sit out most of the 1980s. But, after regrouping several times, Lighthouse permanently reunited in 1992. The band continues to record and tour, performing with the same carefree yet unique sound that has kept them on radio, television, and now in their fans’ iPhones for 50 years.

“At this point,” says Hoffert, “it’s way past doing it for the money. There’s just nothing like the feedback of a live audience.”

Lighthouse will be celebrating this 50-year legacy throughout 2019 with a coast-to-coast tour of North America. However, the band has chosen to start the party in Markham.

“The show we’re doing at the Markham theatre is a very special show,” says Hoffert. “For the first performance of our anniversary, we’ve got an updated show. We’ll be playing hits, but also dipping into the vaults.”

“There’s something special about bringing this lineup to an intimate space like the Markham theatre,” says Hoffert. “It’s one of our favourite little theatres.”