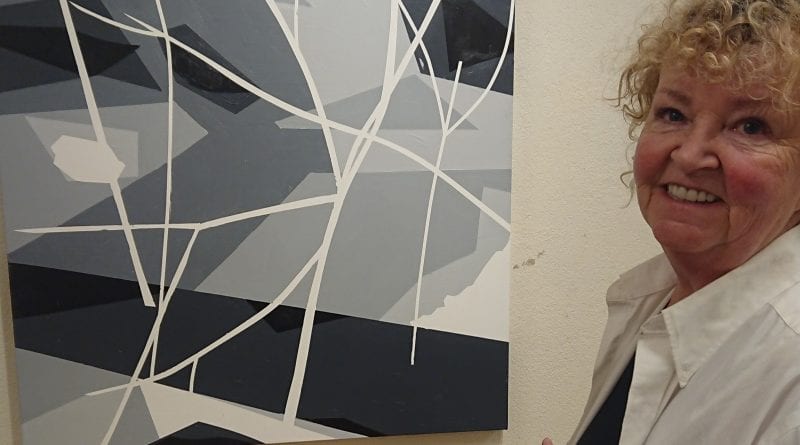 Leslie Beauchamp returns to the McKay Art Centre for a solo exhibition in December.

She has been having an annual show in the 1850s heritage home since 2012 and really enjoys the setting, as well as its connection to Group of Seven member F.H. Varley.

The abstract landscape artist will be onsite for the show, doing demonstrations of her art in the conservatory while her paintings are on display in other rooms. She will also be featuring a couple of pieces by guest artist, Pat Neal, who is a weaver.

“It’s a really cool show because painters and weavers never show together, but our work looks good together and makes a good show,” said Beauchamp, adding that the two artists have teamed up in the past for studio tours.

Beauchamp has always been interested in painting and drawing, but didn’t become serious about it until 2008.  She became a teacher and counselor at a trade school in Scarborough when she realized she couldn’t support herself with art.

However, after retiring in 2005, she embarked on a formal program to study art. Her studies included several years with Andrew Hamilton and John Leonard, who she considers to be her mentor. She met Leonard, an internationally known artist, at the Haliburton School of the Arts in 1988.

She currently works an average 25-35 hours a week in her home studio and she has participated in numerous shows, both group, and solo. She also teaches art on a volunteer basis at a retirement home in Port Perry.

“It’s lovely because I’m always learning from them (and) they want to learn,” she said.

Beauchamp’s work is a distinctive and unique viewpoint of the world around her. The biggest sources of inspiration are the forested area of Oak Ridges Moraine near her home and the rocky mountains of Western Canada. The scenes, captured in acrylic paint, have changed over the past couple of years.

“Two years ago was when I went totally hard edge,” she said. “Before that the scenes, non-objective abstracts were all soft edge. When I started putting a few hard edge lines in, I found they were more important to me.”

She studies a scene, determines what she loves about it and then simplifies the shapes. Pine trees, for example, become triangles, such as in a painting called Whistler. Each of the triangles is a different colour to represents all of the shades of greens found in a single tree.

The Whistler painting will be on display in the show as well as an abstract painting of the same scene that was captured after a fire. The exhibition includes 20 paintings.