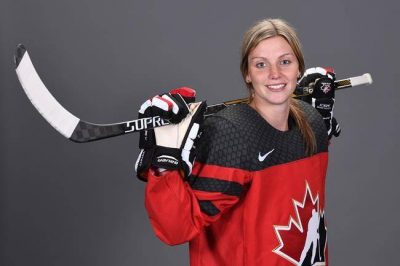 As the great-granddaughter of King Clancy, Laura Stacey has great hockey bloodlines. And now she is about to make her family proud while she represents her country at the 2018 Winter Olympics.

Stacey, a forward with the Markham Thunder of the Canadian Women’s Hockey League, was chosen to represent Canada in the Olympics in Pyeongchang, South Korea, Feb. 9-25. Stacey joins fellow Thunder teammates Laura Fortino and Jocelyne Larocque on the 23-player roster. Fortino and Larocque, both defence players, have previous experience playing for Canada’s Olympic team.

Stacey is one of several rookies chosen to play for Team Canada, which has won gold in the last four tournaments after placing second in 1998 when women’s hockey debuted in the Olympics. After six years of development teams, she was chosen for the senior team last year and played in the world championships. Now she is headed off to the Olympics.

“It’s definitely a dream come true,” said the 23-year-old Kleinburg native. “It’s something I’ve always thought about and had in the back of my mind ever since I was a little girl playing hockey and now to be here and get the opportunity to play in the Olympics and see the dream come to life it’s pretty hard to put into words. It’s pretty surreal.

“When I was a little kid I saw Cassie Campbell and Hayley Wickenheiser and all these females playing on TV for Canada and I sat on my couch and was always like ‘I wish that could be me.’ I loved hockey. I loved the game. I wanted to play it all the time and seeing them on TV I had that idea in my head, but that idea didn’t become a dream that I worked towards until the middle of high school at Rouge Hill Academy when I started getting noticed by a couple of colleges.

“When I made the under-18 team for the first time, then it started to hit me if I put this plan in action and embrace all these ideas and go for it and give it everything I had then it can become this dream that I start working towards. I think that’s when it switched inside of me and said I’m going to do whatever it takes to get there. I haven’t really looked back since.”

Stacey’s great-grandfather did a lot in his career, playing for the Toronto Maple Leafs and Ottawa Senators from 1921-36, but never participated in the Olympics. His son, Terry Clancy, played for Team Canada at the 1964 Olympic Winter Games in Innsbruck, Austria.

“The lineage and family history has been definitely been brought to light a little bit more since I started playing in the CWHL, and as I’ve gotten older I’ve connected to my roots a little bit more,” Stacey says. “It’s pretty special. Growing up, I didn’t really know who he was or much about him. I just knew he was this icon for the Maple Leafs. I had heard stories from so many people, but as I’ve started to get older and more questions have been asked I’ve definitely asked more questions myself about trying to find out more not only about him as a player but the person, too.

“It’s important to me and my family and as much as I can I’d love to continue the legacy he created, not only as a hockey player but as a person too.

“People my age don’t know much about him or who he is, but my parents’ age and that generation knows exactly who he is and what he did and it’s definitely interesting to hear their perspective on it as well.”

Her jersey number is 7, the same as her great grandfather’s.

From the time she started playing, she wore the number seven because of her great-grandfather, but she had to wear other numbers at various times because it wasn’t available. In her sophomore year at Dartmouth College in New Hampshire, she switched from 10 to 7 when the number was available.

“I think that was the first time I really want to be 7,” she says. “It is my favourite number, but I also wanted to honour and embrace the legacy he created. I think it was also more for my family. They grew up watching me wearing the number seven. My grandmother watched her dad wearing the 7.

“We have tons of pictures and memorabilia about him. I’ve seen clips of him on the ice or on the bench or refereeing, but I’ve never seen film of him playing hockey.”

She graduated from New Hampshire in Economics in 2016 and hopes to go back to school at some point for her Masters, but hockey is her priority now. She joined the CWHL after graduating and says it was an awesome opportunity.

Stacey was selected third overall by Brampton in the 2016 CWHL draft. She placed seventh in league scoring with 11 goals and 24 points in 20 games and was named Rookie of the Year. The team moved to Markham last year. Because of her national team commitments, she hasn’t played for the Thunder this season but hopes to be back for the playoffs.

“I loved playing in the league,” she says. “We were playing against some of the top players in North America and that really pushed me out of my comfort zone to get better every day. Playing against that calibre definitely helped me to get to where I am today.”