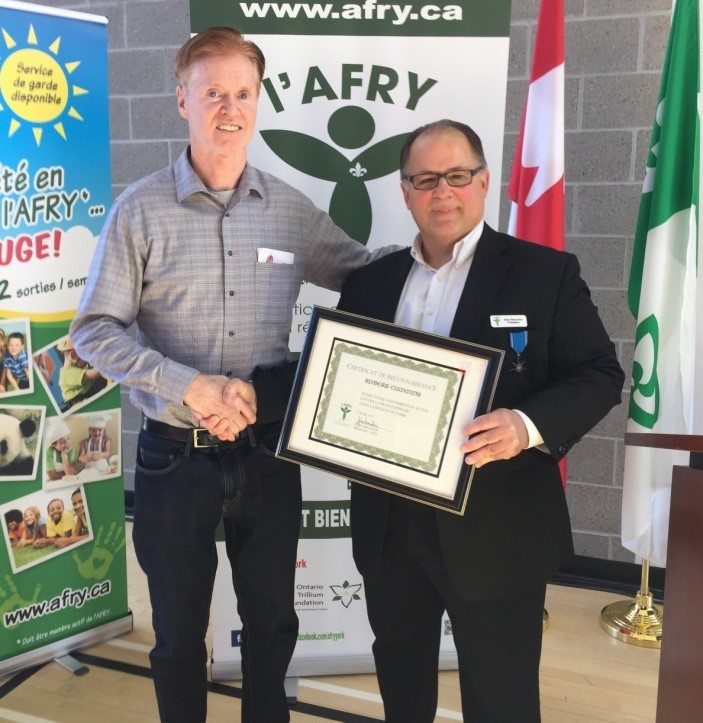 Spring brings flowers and lots of rain showers but it is also a time when the French-speaking community of York Region gathers for the annual Foire de la Francophonie at the Community Centre in Oak Ridges to celebrate the French language and culture. The fair, organized by the Association des francophones de la région de York Inc. (AFRY), welcomed some 350 francophones and francophiles.

Visitors to the fair were greeted with the smell of crêpes made on site by La Bréhandaise Catering, just one of the many local businesses there to promote their ability to service the community in the French language.

“Once again this year, AFRY wanted to show its respect and appreciation to associations, entrepreneurs and Francophone organizations in our beautiful region of York by presenting the Francophonie fair for the fourth year,” said Alain Beaudoin, president of AFRY. “This event is a tremendous milestone for business representatives, education, social and community organizations, government departments and members of the community. It is also a unique opportunity for students in French-language schools in the region to demonstrate their talents and to express themselves in French outside the classroom.”

Entertainment was provided by ‘Les Enchanteurs’, the Francophone Choir of York Region, and students from the French Public and Catholic School Boards. From Markham, the student choir from the Catholic Elementary School Sainte-Marguerite-Bourgeoys was in attendance.

Beaudoin also presented York Region resident Robert Cummins with AFRY’s recognition award for his active contribution to the French language in the region. Born in England from Irish parents, Cummins moved to Canada as a young child. He always had a latent desire to speak French but was finally motivated to learn because of a trip to Baffin Island.  There he met a four-year-old who effortlessly switched between Inuktitut, French and English. This encounter with a trilingual Canadian toddler left him determined to learn French.  Not wanting to lose his fluency in the language, Cummins now organizes free bi-weekly French conversation groups in Richmond Hill, Aurora and Newmarket for those who wish to practice or share their French in a supportive environment. For information: www.meetup.com/Partagez-le-francais

According to the Ontario’s Office of Francophone Affairs, there are more than 16,000 francophones in York Region including more than 4,000 live in Markham. In 2015, as a result of strong community support, the city was designated under the French Language Services Act. This means that as of July 1, 2018, all Ontario government offices located in Markham will offer French-language services.