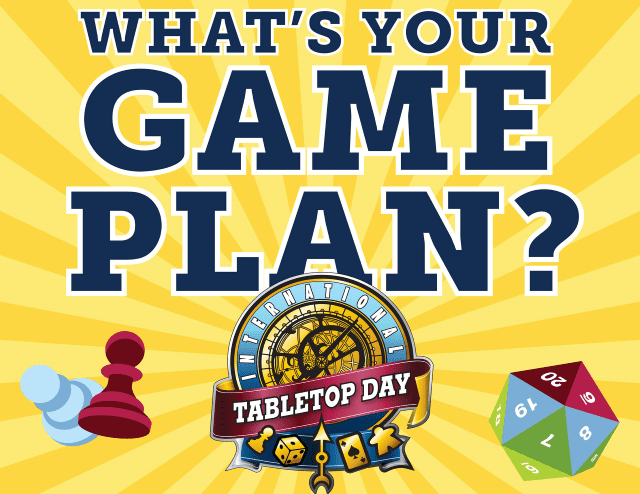 Gamers, get ready. April 30 is game day, or should we say gamers day, at Cornerstone Christian Community Church.

The organization is hosting its first ever edition of International Tabletop Day, a yearly global gaming gathering which has spread to 80 countries since it began in 2013.

“We really wanted to put something on for the community… We want this to be a shared experience, something we want all people to enjoy,” said Wayne Chang, event co-organizer.

“Tabletop gaming is about that shared table experience.”

Though role playing games and geek culture are often the butt of jokes in movies and on TV, Chang wants people to leave their preconceived notions about gaming at the door.

“We really encourage people to come to just see what’s out there,” he said, adding the event is open to all ages and skill levels.

“Bring your kids along… just come in and play something. Introduce your kids to something new.”

For Chang and other gamers, the pastime is so much more than just a hobby. It’s a community, a culture and social network that endures long after the match is over. Chang said it is a creative outlet and something that can really enrich peoples’ lives, particularly youth.

“As a parent, would you prefer to see your kid sitting around a table, talking to each other, doing some simple math, rolling dice and telling stories to each other or would you rather see them headphones on playing video game,” he said.

“I haven’t met a parent yet that has said they’d rather their kid sit isolated in front of a computer or TV.”

Of course, it wouldn’t be a table game celebration without some old standbys. For those who can’t quite catch on to D&D or who want to take a break from Settlers of Catan, classic games like Scrabble, Monopoly, Clue and Risk will be available for table game purists.

“There’s all kinds… We have a games library available that day too so people who just want to come in and play something they’re certainly welcome to do that too,” he said, adding the church has a wide selection of mainstream board games.

Though playing games is fun, organizers want to take the event to the next level. With the help of Toronto teacher Vernon Kee, a recipient of the 2013 Prime Minister’s Award for Teaching Excellence, organizers will not only give attendees an opportunity to play games but build them too.

“He’s going to teach a seminar about how to use a 3D printer to create games, how to create those models,” said Chang, adding spots in the demonstration are filling up quickly.

“We’re really excited to have him.”

All proceeds from the event will support Cornerstone Pantry, a food bank run by the church that supports more than 40 families in the Markham area. Admission to Tabletop Day is $2 with a non-perishable food donation or $5 at the door.

Admission: $2 with food donation or $5 per person