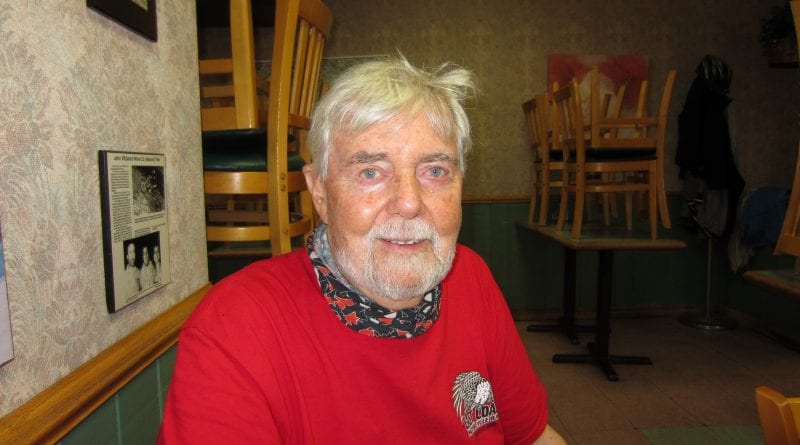 I was at it for over 35 years. We rode nitro-methane powered motorcycles. They run on rocket fuel and they put out over 300 horsepower. I rode Harleys, I rode Indians, I rode Hondas, and I rode a six-cylinder Benelli. I still hold the hill record in Muskegon, Michigan. I won five world championships, ten-time Canadian national, seven-time American grand national. I’m in the Guinness Book of World Records as the only Canadian to have won a championship in any form of motorized sport.

I accomplished this because it was a Canadian team effort. I got the glory, rode the motorcycle, but there were a lot of people to depend on. My wife took over as chief pit-crew for three seasons and we won three World Championships. My two boys hill climbed with me for thirteen years. We helped each other. The man who made my Hondas was Nick Kemp from Sutton. He was a genius. I didn’t win for ten years until I had him working on the iron.

The last ride was at York, Pennsylvania. It was in ‘93 and I’m runnin’ a 300 horsepower Honda. And the motor was fresh, and it was the first time I ran it since they did it all up. I could tell it was really crisp. I reached down, opened it wide-open, dumped the clutch and I came out of that cannon. I got right near the top of the hill and the bike turned sideways. I didn’t even have time to shut it off and it launched over the top of these trees that were on a plateau beside the hill. I was fifteen feet in the air and the bike is way out in front of me. This is one time I had time enough to think, “Williams, you rode one time too many. You are buyin’ it.” I started to tilt forward. I fanned my arms backwards so that my body went straight, and I disappeared down into the trees. I don’t remember anything. I was out cold.

They’re trying to find me but I’m in ten-foot-high wild rose bushes—an island of them. Ten thousand people wondered, “Why are they going in there to get that guy? Nobody could find me.” And then I came to. And I thought I gotta try to get up. And as I leaned forward, I looked down and my boot was upside down against my stomach. I took one look at that and I thought, “You know what? This is the last hill climb.” I was so lucky. I could have broken my back. I could have broken my neck. If I had gone in head-first, I wouldn’t be sitting here talking to you. I’d be done. I was fifty-six when that happened.