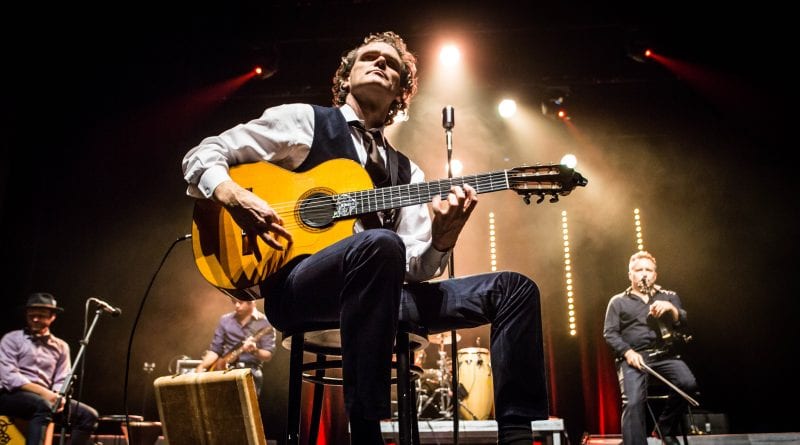 Born in 1964 to a Canadian mother and a French father, a young Jesse Cook came to Canada with his mother, shortly after his parents separated. Whether it was divine inspiration or merely the musing of a young boy, he begin studying classical guitar in Toronto.

Meanwhile, in France, his father moved next door to the lead singer of the flamenco band, The Gypsy Kings. It was on visits to see his father and getting to know his father’s new neighbour, that led to the birth of Jessie’s inimitable style of fusing the music of different cultures.

Returning home, Jesse quickly progressed to the Royal Conservatory of music, York University and then to Boston’s famed Berklee School of Music. With training and inspiration as his first fusion, Cook’s lifelong music career was ready to begin.

“He’s just the best,” says Eric Lariviere, Markham Theatre general manager, where Cook returns on March 21. “When it comes to world music guitar, Jesse is really the best in Canada.”

This opinion is born out by the facts too. After two decades of crisscrossing the world in restless pursuit of inspiration, innovation and collaboration, Jesse is the most successful totally instrumental artist to come out of Canada since Oscar Peterson. With more than a million and a half records sold around the world, nobody really even comes close.

I’ve made 10 records over the years, so, when you make a new record, you have to go out and tour it,” says Cook. “We sold 10,000 tickets in the GTA over two years touring the last record. We love to get out and play here.”

Cook admits that he’s played the Markham Theatre more times than he can remember, but he does remember at least one show in particular.

“One time I threw my back out completely before a show in Markham,” he remembers. “I remember lying on the floor backstage at the theatre trying to muster the courage to pretend I was okay. But the show must go on and the audience in Markham got me through it.”

This points to the kind of performer Cook is at his core. As a student of Flamenco, he’s careful to point out that he’s more a lover of the genre than a master. Cook explains that, in flamenco, the energy in the room is the responsibility of every one there. The performer is not separate.

“Everyone in the room is part of the creation and expression and everyone is responsible for creating that moment,” he said. “It’s a two way thing. If they get up and dance, it changes the show. It affects you when people react to you.”

That ethic is surely why Cook is entering his 25th year as a performer of his own material. Of course, a prolific quarter century as an artist can lead to other problems.

“Every night we leave the stage with people calling out for songs but we just can’t get to them all,” he explains. “I can’t get off a stage without playing Mario Takes A Walk or Tempest. There’s a bunch of them and we love playing them. But we also find time to play a few off the new album too.”

Of course, most artists dream of these types of problems. Cook makes sure to acknowledge that he doesn’t want to dictate what his audience should feel though. He tries to build his shows for those who might have different  reasons for being there.

“Some people come for the rumbas, they want the dance party,” he says. “Some people love the more introspective songs. One woman wrote me and said she cried all the way through Tuesday’s Child when we played in Minneapolis.”

This respect for the experience of his audience is also why he is booked in the same venues again and again.

“That’s a big part of why he’s such an amazing artist and why people follow him,” says Lariviere. “People love him and our audience looks forward to him coming back every time.”

“Music is so subjective,” says Cook. “I just hope that we make a connection with the audience, whatever that is.”