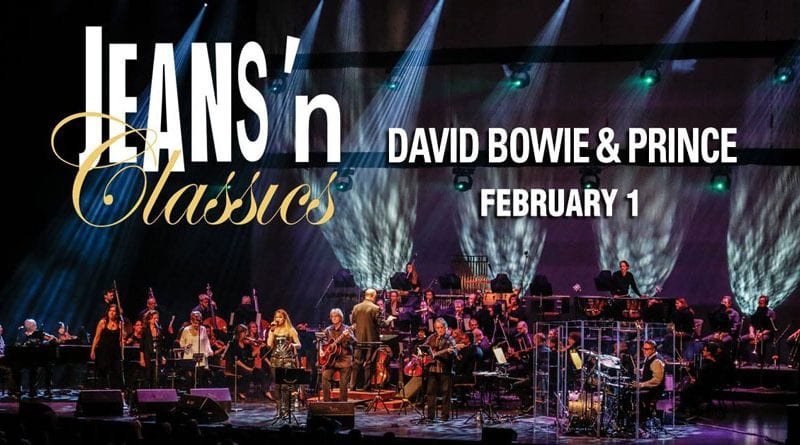 Jeans ’n Classics is a group of musicians who understand orchestra culture and are committed to help in the building of younger, loyal audiences for symphony orchestras across North America.

Appealing to an age group from, but not limited to, 25 to 65, the band is most definitely not a tribute act. Rather, they faithfully interpret the music of legendary rock and pop albums and artists, with their own special and signature flair. Symphonies far and wide have heralded the quality of our orchestral scores.

After working with more than 100 orchestras in venues throughout North America, they have created almost 1,000 original rock and pop orchestrations, which are presented across 45 unique and exciting productions. Their reputation includes providing lush, fully-realized arrangements of rock and pop classics for rock band and symphony as well as top notch, easy-to-work-with performers who truly know how to deliver a great rehearsal and live-show experience with professionalism, humor and finesse.

With his lightning speed comedic timing, skills on the dance floor and a truly exceptional, emotional voice, vocalist Gavin Hope is a natural born performer and always a fan favourite. His diverse career includes song, stage, TV and film that feeds his wanderlust well. The Juno-nominated solo recording artist has performed around the world, sharing the stage with such greats as Aretha Franklin, Natalie Cole, Jill Scott, James Brown and Deborah Cox, to name a few. His theatre highlights include lead roles in the original Canadian companies of Rent, The Lion King, The Tempest, As You Like It and Smokey Joe’s Café.

Gavin is also known for his work performing as a member of Canadian acappella vocal group The Nylons, with whom he has toured the world and recorded six studio albums. He has earned rave reviews for his most recent studio album, For All We Know, in collaboration with pianist Bill King.

Jean Meilleur has been a headliner with Jeans ’n Classics for more than 20 years. In that time he has performed with scores of major North American orchestras, lending his distinctive voice to some of the greatest popular music of our time. A prolific songwriter who has been performing professionally for over thirty years, his singing voice can best be described as passionate and provocative, with a robust timbre that is immediately recognizable. His voice stands as a true original and has been heard over the years on many national radio and television jingles and advertisements.

“It’s a privilege to share the stage with a symphony orchestra,” says Meilleur. “To have the opportunity to sing some of the greatest popular music of our time, in my own voice, is a rush beyond compare.”