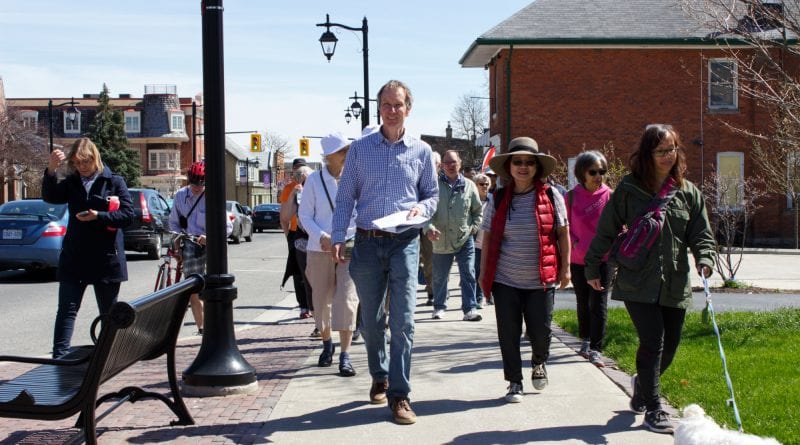 On Sunday, May 5th forty-two residents met at the Old Town Hall for the annual Jane Jacob’s walk. George Duncan, the Senior Heritage Planner guided the tour. From the stairs of the City Hall, he told of the first settlers and farmers who focused on clearing the land and then growing wheat. This was the foundation that generated the stability and wealth for future residents, services, industry, and development. The village was officially formed from out of Markham Township in 1873.

Here are some highlights: 91 Main Street originally housed the Standard Bank of Canada. The bank vault is still inside The Old Curiosity Tea Shop. 96 Main was the Town Hall from 1882 into the 1940s. It housed the council chamber, courtroom, library, fire hall, and village lock-up. Eventually, it became a movie theatre known at the Roxy. 124 Main was built as a drug store by William Miller & Co. in 1882. Reuben A. Mason was the manager, and later the owner. The letter M for Mason was featured in the attic dormer. When the drug store business was sold to Reef Wilson, the story is that the M was turned upside down to become a W. Other stories related by Mr. Duncan told of fathers passing their business to sons, why buildings had different coloured bricks, how farming was done, machinery made, and who did the work.

Jim Donevan said that the walk was important for building community and connections. He felt that the stories of the early settlers were inspiring because they had started with so little and had made such a lasting contribution. He added that knowledge about the past translates into better decisions for the future. He recalled a community garden south of Hwy 7 at Kennedy Road and would like to see another at the Markham Center. Maria Cerone who serves on the Heritage Committee thought that Markham has a mini-Niagara on the Lake and that we need to preserve and treasure it. Deputy Mayor and Regional Councilor Don Hamilton was happy to see the fantastic turn-out and thought that Mr. Duncan was an ideal speaker for the event. For the previous three years, Lorne Smith had guided the walk and attended this time as well.
It was a perfect day for the walk. Paul Salvo who has organized Jane’s walk for the last four years recalled that Jane Jacobs (1916-2006) was a writer, urbanist and activist who championed the voices of everyday people in neighbourhood planning and city-building.