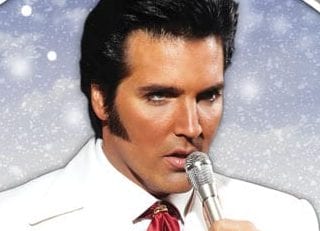 Steve Michaels is an international award-winning tribute artist and actor based out of Milton. His passion for Elvis sparked at a very young age and has continued to be the drive behind his success. Some say he was born to play the King.

His performances have garnered him worldwide attention, even playing alongside some of Elvis Presley’s iconic bandmates, including the legendary drummer DJ Fontana and bassist Jerry Scheff. In addition, he has shared the stage with the smooth gospel sounds of the Jordanaires and the soulful voices of the Sweet Inspirations. His ability to successfully capture an authentic portrayal of Elvis Presley has endeared him to audiences across Canada, the United States, India, Thailand, United Kingdom, Hong Kong, Philippines and Australia.

Michaels has created, written, directed and produced each and every one of his shows to date. He has played to countless sold-out audiences everywhere with an exciting stage presence, remarkably authentic costumes and the electrifying southern charm that Elvis was known for. The Wonderful World of Christmas is the perfect family concert experience and a show for all ages. It’s not to be missed.