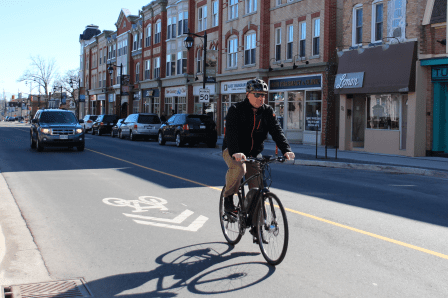 There has been some progress in recent years to tackle the lack of transportation options in this city. The advent of the VIVA has helped. YRT has become more effective.

More recently, the “rideshare” program Uber started using technology to simplify things. Many have looked to the company for solutions to transportation problems, but this solution has caused new problems. With nearby Brampton and Mississauga city councils calling for suspensions of Uber, Toronto voting in favour of writing new regulations while Markham cabbies claim an 80 per cent drop in business; how to get around Markham has fast become an important issue to be solved.

“The problem lies with the technology,” Markham City Councillor Don Hamilton said. “I don’t see how to stop this. You can put in all the bylaws you want, but how do you enforce it?”

Is there an alternative to driving at all?

“There are lots of opportunities to choose a bike over a car for local travel,” said avid cyclist Mark George, “Most car trips are done solo and over a reasonably short distance.”

The biggest barriers to commuters choosing bike travel are concerns about traffic and distance.

“There are lots of different route options,” said George, “and many of them involve multi-use bike paths that keep you away from any traffic.”

There is also the advent of dedicated bicycle lanes on more roads in Markham. York Region has published a cycling master plan and several cycling maps to assist in planning a good route.

“As for distance, with a little planning, I find I can usually get where I’m going faster on my bike than by car… at least during peak traffic.” George adds. “It’s not like there’s traffic on the bike paths.”

Of course, there are other concerns for bike commuters, including having a place to change at your destination and a place to lock up your bike. However, many employers have been quite supportive of employees riding to work in the past few years. As it turns out, people are more alert, ready to work and in a more pleasant state of mind when they choose to ride over driving.

“A safe, trustworthy bicycle will run you about $650,” said George, who also owns the Station Ski and Ride shop on Markham Main Street, “but it pays for itself faster than you’d expect.”

He adds that he had one customer who saved enough after about a year on gas, tolls and parking that he took his kids to Disney World on the savings.

For longer commutes, there are hybrid electric bicycles too. They are more expensive, but still much cheaper to run than a car.

So, in this tech driven Uber world, perhaps the new symbol of freedom will actually have two wheels instead of four.