When the first Canadian astronaut to head to the International Space Station since Chris Hadfield blasts off in December, he may take a piece of Markham with him.

David Saint-Jacques may also be sleeping a little better on his six-month mission, thanks to Middlefield Collegiate Institute student Chanpreet Sandhu. She’s a top four finalist in the national Little Inventors: Inventions for Space challenge for her Deeper Sleeper Machine. 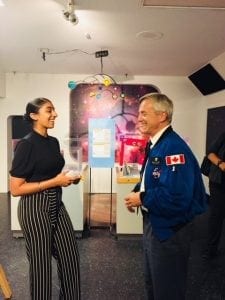 Her concept is designed to help astronauts get more Rapid Eye Movement (REM) sleep while on board the Space Station. Her concept was turned into a functioning prototype, on display at the Canadian Aviation and Space Museum in Ottawa, as part of Science Literacy Week, which runs through Sept. 23.

In November, one of the top 11 prototypes will be selected for testing on the Space Station by Saint-Jacques. “Sleep is a big problem on the space station because astronauts will lose anywhere from 30 to 60 minutes of sleep per day,” Chanpreet says of her invention. “When I lose sleep, I can’t function so I knew my idea would be a great way to make life easier on the space station.”

The 15-year-old recently travelled to the museum to see the unveiling of her prototype and met with industry experts, including Dr. Robert Thirsk, Canadian Space Agency (CSA) astronaut.

Little Inventors is the brainchild of artist and designer Dominic Wilcox, in collaboration with expert educationalists, designers and curators. His work has been exhibited in museums and galleries around the world and he has been commissioned by famous brands such as BMW, Nike and Kellogg’s.

“Our aim is to inspire and support children around the world to use their wonderful imaginations to think up ingenious, fantastical, funny or perfectly practical invention ideas with no limits,” the organization says on its website.

“When our team chose to incorporate this challenge as part of our course, I never could have imagined that one of our students’ ideas would be selected to have a prototype developed,” said Alison MacPherson, teacher and department head. “Chanpreet is such an incredible young woman and her overwhelming success is a reminder to me to continue to take chances to be innovative in the classroom.”

The competition, hosted in partnership with the Natural Sciences and Engineering Research Council of Canada and the CSA, challenged children ages five through 15 to come up with inventions to make life in space easier and more fun. The top inventions were selected from more than 2,000 submissions.

Top image courtesy of nserc.littleinventors.org. Image of Chanpreet Sandhu and Dr. Robert Thirsk courtesy of the York District School Board.