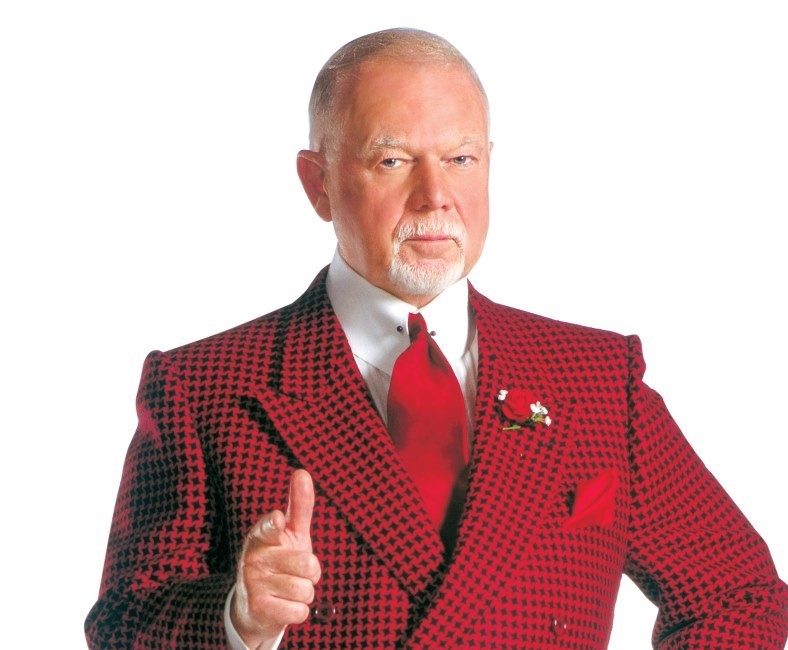 It’s hockey season and that means Don Cherry is doing what he loves best: watching and talking about games at the pro and minor hockey levels.

He is in his 36th season doing Coach’s Corner with Ron MacLean, providing insights and opinions about the game and, occasionally, other matters, knowing full well others don’t always agree with him.

To that point, the Review spoke to Cherry about the Toronto Maple Leafs and their chances for this season and when they might be a Stanley Cup contender, what gets him excited about doing Coach’s Corner after all these years, and watching minor hockey games with his son Tim, who scouts for the Ontario Hockey League.

Review: What are your thoughts about the Leafs’ chances this season?

DC:  As we talk, they are 3-0, they outshot Chicago 43-21 winning 4-3 in overtime. You can’t be much better than that. They are (playing) loosey-goosey, three have three great goaltenders now and I think they are going to make the playoffs, that’s for sure.

Review: Some fans think the Leafs might win the Stanley Cup in two or three years? What do you think?

DC: They need a couple of stud defencemen to go along with what they have now. If they have a weakness, it’s their defence. The forwards can skate with anybody. They play run-and-gun hockey. I don’t know how that will be in the playoffs when things change, but they’ve got a good club. They are not an easy team to play against if you are a defenceman because of the way they skate. I think the fans were really excited about the team last year when they made the playoffs. If you notice, there’s nobody throwing sweaters on the ice or anything like that. I think everyone was prepared last year for the Leafs not to make the playoffs because they were in their rebuilding year. The team surprised everybody. They were healthy last year and they have an exciting group of players with (William) Nylander, (Mitch) Marner, Matthews, you could go down the list. I think Connor Brown is one of their best players. When you have a 20-goal scorer on the fourth line, you know you’re doing pretty good.

Review: You’ve always been a fan of the Leafs in addition to the Boston Bruins, which you coached, but does it give you added excitement doing the games now because Toronto has such an explosive team?

DC: When we go to any Canadian city that has an NHL team, there’s always a bigger cheer for the Leafs. They are an exciting club and no matter what you say they are Canada’s club. The most exciting Leafs team that I watched was the ’93 team. I got a bigger kick out of watching them, maybe it’s because Dougie Gilmour was playing for them. If it hadn’t been for referee Kerry Fraser’s missed call, (who knows what would have happened). I can never figure that out, 16,000 people in the building and everyone on TV saw Wayne Gretzky cut Gilmour with a high stick. The only three guys that didn’t see him cut him were Kerry Fraser and his linesmen.

Review: What do you think about Auston Matthews’ ability relative to Connor McDavid?

DC: You’re not going to compare him with Connor McDavid. Matthews is a good hockey player with an exceptional shot and he’s always in the right spot. How he learned that growing up in Arizona, I don’t know. I guess he learned it playing overseas in Switzerland for a year. But he’s a dandy hockey player and you give him a chance around the net and he can put it in. He’s an opportunist and seems like a good guy. The players seem to like him.

Review: What gets you cranked up about doing Coach’s Corner after all these years?

DC: Believe it or not, when I’m going down to the games I’m just as excited as I was 36 years ago when I started. I don’t know how I’ve lasted this long. I’ve been fired about 10 times. I think it’s enthusiasm, and people can see I enjoy it. That’s why I think I’ve lasted 36 years.

Review: You and Tim go to a lot of minor hockey games in the Greater Toronto Area. What’s that schedule like?

DC: We go quite a bit, at least once or twice a week. I enjoy it. The players seem to enjoy it. Connor McDavid and others have said they have enjoyed having me there watching them when they were young. We go to different rinks. Tim’s got to see every team because he rates the players for the Ontario Hockey League.

Review: When you go to minor hockey games, are people surprised to see you there or are there enough people in the hockey community that know it’s a part of your life and expect to see you there?

DC: When Americans come from Detroit or Minneapolis or places like that for tournaments, they don’t expect me, but most (GTA) parents know I go to these games most of the time.