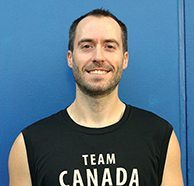 The balls will be flying in Markham this month when the World Dodgeball Federation’s global championship comes to town.

The event, which has never before been hosted in Canada, will take place from October 18 to 21 at the Markham Pan Am Centre, bringing hundreds of the world’s best dodgeball players from as far away as Australia and Malaysia for the fast-paced, high-flying sport.

Between 10 and 12 countries are expected to send teams to the World Dodgeball Championship. Most delegations will have a men’s team and a women’s team—each with anywhere from eight to 12 players.

“When Canada wanted to host the world championship, we had a couple of options,” he said. “We had to look at where we had strong dodgeball communities, and where people from all over the world could easily access. But Markham specifically is a great area for people who are coming to Canada.”

If there’s such a thing as a home court advantage, that will be especially true for Team Canada player Jonah Koplowitz, a Thornhill resident.

The 32-year old property manager has been playing dodgeball since 2009, during which he has thrown balls on Canada’s national team at the world championships in Australia and Las Vegas. Though he loves the travel, he said he’s thrilled to be playing so close to home.

“Really it’s like a dream for me to be able to play this game that I love and to represent the country by playing in the country,” Koplowitz said.

Organizers value Markham itself for its proximity to the airport and other hot spots visitors might enjoy seeing. But the Pam Am Centre—opened for the 2015 Pan Am Games—was a boon for the bid as well.

“The site was great for us because what we really wanted was legitimacy,” said Wysynski. “Here we are talking about dodgeball as a sport and the public perception of it. One of the ways we wanted to challenge the public perception of dodgeball was to use this world-class facility that was built for a well-recognized event—the highest calibre of athletic competitions. Using that adds legitimacy to what we’re trying to do.”

Dodgeball generally uses courts set up to volleyball standards and dimensions, so the Markham Pan Am Centre—with its seven regulation courts—is a great host for the tournament.

The facility will also have areas set up so each team has access to locker rooms, showers, concessions, and even massage services.

The rules are pretty simple: players lob foam balls across a court with the goal of striking—and thus eliminating from play—their opponents.

Despite the intensity and pace—as well as the athleticism of its players—many people view dodgeball as a game, rather than a sport. For Wysynski, the public education component is key.

He pointed to a study Dodgeball Canada commissioned that showed more than 95 per cent of respondents viewed dodgeball a game, with one exception.

Wysynski compared the rise of dodgeball to that of another “fringe” sport, Ultimate Frisbee, which was unknown 20 years ago, but now sees immense popularity.

“Dodgeball has, in the last few years, gotten to that stage where it’s moved from something you do recreationally…into the arena where people have said, ‘I’m good at this. I can do this. I’ve got these skills and abilities to take this to a competitive, international level,’” he said.