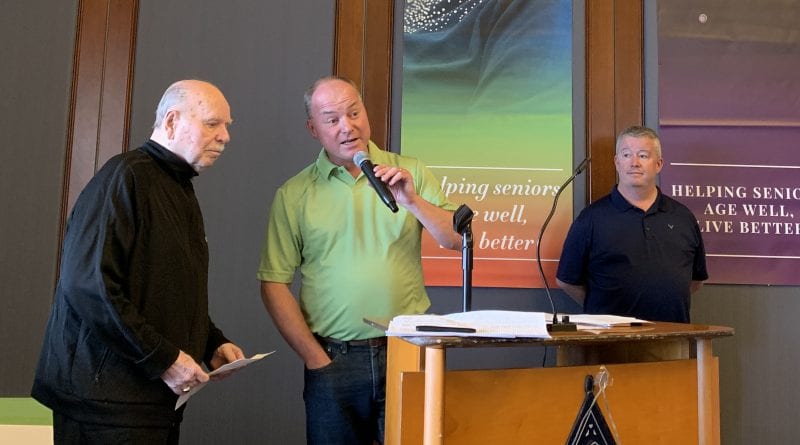 Unionville Home Society (UHS), one of Markham’s most notable senior residences has been a pillar of the community for years and continues to challenge itself to grow and better itself for the benefit of the many incredible seniors who make it their home. The efforts were on display recently at the annual UHS golf tournament that brought together members of the broader community and residents of UHS.

Tournament co-chairs Larry Mariani and Danny Fantini showed off this year’s cheque for $74,000 in support of UHS. To date, the duo’s annual golf tournament, with the help of many volunteers and sponsors, have raised $350,000 for UHS.

But while the money raised was enough to lift spirits, the highlight of this year’s tournament luncheon was an inspiring speech from Billy George French, 86, a resident at the UHS (aka Union Villa) long-term care facility. He leads the monthly adult bible study as part of the twice-a-week church program at UHS. If the pastor doesn’t show, he will stand up read scripture and give a mini-sermon and help out around the place.

French was born in Canada and then headed south to the United States with his family, where he grew up and spent the majority of his life before coming back home.

Early on in school, one of his teachers decided there were already too many boys with the name Billy, so started calling him by his middle name George. He’s been know as George ever since. And does George ever have a story to tell. Complete with chapters overcoming physical adversity, war and even working with Martin Luther King, he told his story to the assembled. The following is his address, edited for space:

“There is a wonderful way of helping others, and this is it: giving to others, caring for others, most of us have been taught to help ourselves, and while that isn’t bad, it doesn’t include helping others.

And helping others is a part of life.

When I was born, I was born with bilateral clubfeet. Four wonderful doctors in the city of Toronto told my parents I would never walk in all my life, and I would die before I was five years of age.

Those were great doctors, and at that time, that’s what any doctor would have said. They have all done wonderful things that I have heard of in Toronto. And they were to be respected, not put down for the decisions that they made.

As a child, I had that kind of problem.

It wasn’t until I was four that I was able to stand up. Then, after standing up, by five, I was able to go to kindergarten. My brother and sister held my hands and walked me to school.

My brother went in and told the teacher if you are playing any games that are running here in kindergarten, my brother can’t run, you can’t let him run because he can’t, (he’ll) fall and hurt himself.

So I went through kindergarten with that kind of experience.

After kindergarten, almost every day, I went out and walked, a block, two blocks, three, eventually where I was going for an hour walking, and I was thrilled; I had been helped to walk. My mother had helped me; her faith in God.

I went to high school, and the high school coach was Hal Brown, the Canadian Olympic coach. He had been an Olympic runner himself, and he called me in and said ‘I want you out every day for an hour after school. I’m going to teach you to jog and to run; you already know how to walk’.

So, Hal helped me. I went to the Junior Olympics when I was 16 and won the ½ mile.

He introduced me to the possibility of (a) university scholarship, and he got me a scholarship at the University of Dubuque in Iowa. I had no money, so to have my way paid for four years of university, my food, my clothing, my housing, everything. It was wonderful. I was helped, people help other people, and I had it all my life, help.

When I was at the University of Dubuque, I was the conference champion in the mile, the 2-mile and the ½-mile and they were wonderful to me. The president of the university was a minister, and I had gone from the Anglican church to the Presbyterian to follow him. I thought he was wonderful, and I married his daughter.

After graduation, for 10 years I taught at a high school, physical education. Had a wonderful time.

I got drafted and served in the American Forces in the Korean War; I was in the 82nd Airborne (specializing in parachute assault operations). I enjoyed it immensely, the jumping.

I didn’t enjoy the war one bit,  saw my friends, my close colleagues, dying around me on either side, and I felt for them, and I thanked God that I was alive. God had taken care of me so wonderfully. I began to feel more and more, when I was at Dubuque, there was a seminary there, and I thought a little about going there to seminary and becoming a minister to help others. Now I thought that is what I would do.

I went back to Dubuque, went to the seminary there and became a Presbyterian minister, served in the United States (Air Forces), worked with Martin Luther King for five years.

I thought the black people would not like me, when I came in, a white boy coming into an all-black church. Black people were absolutely wonderful to me. They were kind to me, and I thought they wouldn’t be. Not so, and it has become a wonderful world. Now we have black and white wherever and no problems. Caring for other people is a big thing in our world. To reach into your pocket and share. To share with others, we in the seniors home, we’re paying good money to be there, and they are taking wonderful care of us. There is no one there that isn’t being cared for well, and I thank you all for your response to the needs of the seniors.”