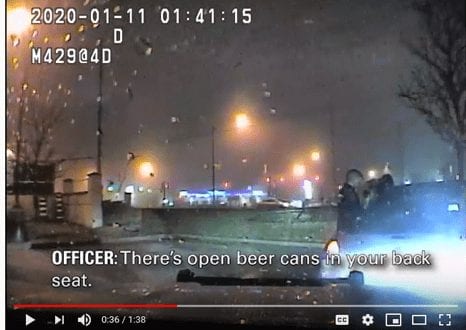 York Regional Police (YRP) arrived in the parking lot at Tim Hortons at Keele Street and Rutherford on Saturday, Jan. 11 around 1:30 a.m. and found a man in the driver’s seat of a vehicle that was running.

Officers could smell alcohol on the driver’s breath and saw open beer cans inside the car. The driver was placed under arrest after failing a roadside breath test. In a search of the vehicle, officers found a loaded handgun and a box of ammunition on the front passenger floor.

“We saw him walk around and we saw him fall a couple of times. He dropped his glasses, so we just went out to help him,” the caller told the 9-1-1 operator. “He was not OK.” Video from the incident can be viewed at https://youtu.be/qm45eUnGxRU.

YRP received 3,500 calls to 9-1-1 to report suspected impaired drivers as part of its Safe Roads, Your Call program last year. That was an increase of nearly 18 per cent from the previous year. Many of those calls led to the more than 1,700 impaired-related criminal charges laid. If you see dangerous driving or behaviors on the road that could jeopardize the safety of motorists and pedestrians, you are encouraged to call 9-1-1 immediately.