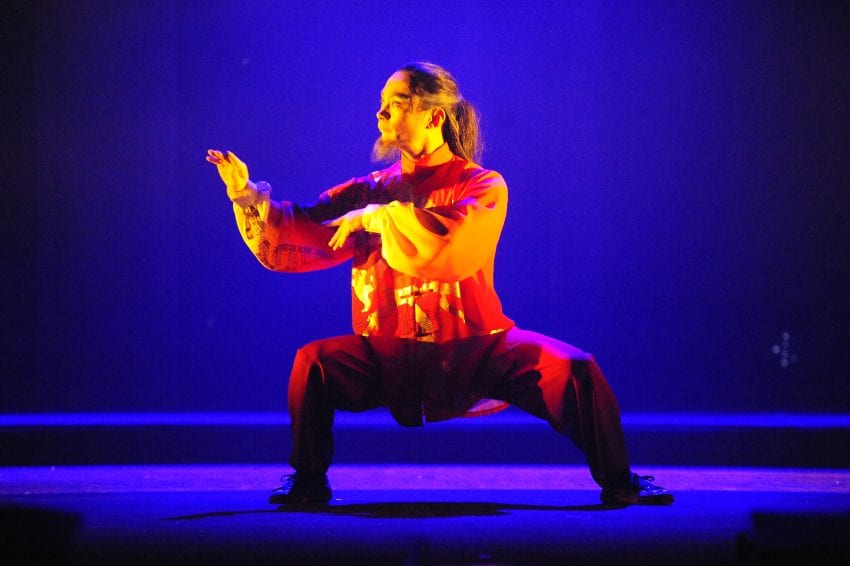 The Immortal Chi company will bring its show, A Warrior’s Quest for Balance, to the Flato Markham Theatre Apr. 20 to 22, hoping to dazzle audiences—but also tell a story.

The production focuses on a master of Tai chi, a five-century-old Chinese martial art, as he tries to take control of his “inner energy and life force.”

Though it may sound like an exercise in meditation, the show features bold displays of martial arts, traditional Chinese weaponry, and a percussion ensemble to drive both the beat and the story.

“When ancient tradition and the rich theatrical history of China unite and spring to life with a contemporary twist, you discover Immortal Chi,” producers promise. “A sheer delight that’s a sumptuous theatrical experience for all ages.”

A Warrior’s Quest for Balance is directed by Érick Villeneuve, a Montreal-based multimedia artistic director and visual designer.

Villeneuve said the balance of old and new was important in putting the show together.

“Although we were aiming for a very contemporary show, I wanted it to have a strong and authentic grounding in the traditions of kung fu,” he said. “After that, we began casting first choosing kung fu artists and then assembling an all-female percussion ensemble. Chinese performers are the best, working with them is fascinating.”

Villeneuve has staged a number of shows in China going back more than a decade, including a multimedia acrobatic show, Kaleido, which had a two-year run at Shanghai’s renowned Gong Theatre.

Even though Markham has a sizeable Chinese population, the show, which features a predominantly Asian cast, aims to wow audiences of all kinds.

Though the cast members work with a choreographer, all are trained in martial arts.

For Villeneuve, this show carries more of a story than previous productions—which have leaned more heavily on the performers’ feats than a narrative to string it all together.

“Immortal Chi is not a traditional kung fu show,” Villeneuve said. “People who are not familiar with kung fu will enjoy it for the lavish design, movement quality, and dynamics. And for the martial arts fans, it will bring a spectacular performance element to techniques that they know, it shows them in a fresh light. Immortal Chi really does have something for everyone.”