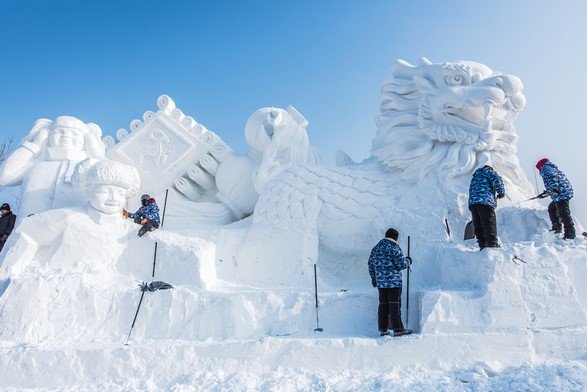 Frigid temperatures are perfect for the Markham Ice and Snow Festival.

“The Harbin International Ice and Snow Festival has to be seen to be believed and we are excited to host some of its world renowned artists and organizers here in Markham,” said Mayor Frank Scarpitti. “The bitterly cold temperatures are just right for this first-time festival. This is your chance to take in stunning ice sculptures and what promises to be an awe-inspiring display of creativity and art. Markham is proud to be a global destination for residents and tourists alike.”

Presented in co-operation with the City of Markham and the Harbin People’s Government, the festival is inspired by the Harbin International Ice and Snow Sculpture Festival, known around the world for its stunning display of breathtaking ice sculptures. In 2007, the Harbin festival featured a Canadian themed sculpture, in memoriam of Canadian doctor Norman Bethune. It was awarded a Guinness World Record for the world’s largest snow sculpture, measuring 250 metres in length, 8.5 metres high and made from more than 13,000 cubic metres of snow.

The Markham Ice and Snow Festival will be hosted outside the Markham Civic Centre from Feb. 9-19.

Not only will the festival introduce Markham and the Greater Toronto Area to one of the greatest winter festivals around the world, it will also provide a platform for Canadian and Chinese artists to display their work and further promote the municipal friendships between the City of Markham and the City of Harbin, China.

Photo: The Markham Ice and Snow Festival will be hosted outside the Markham Civic Centre from Feb. 9-19.