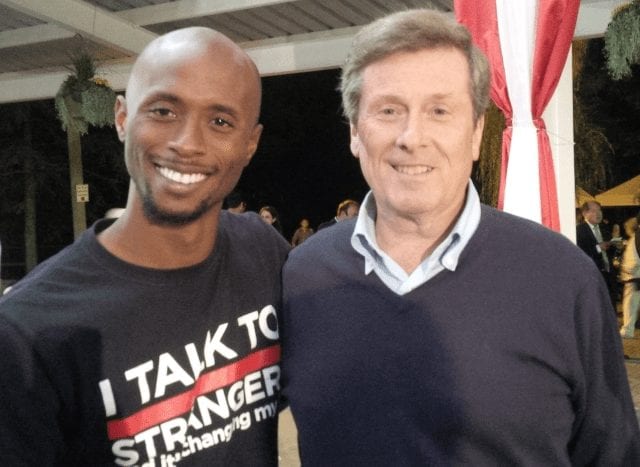 Remember when your mom told you not to talk to strangers? Well, Robbie Stokes Jr. began to ask: why the heck not?

Stokes, a former NASA consultant who had been employed at the US House of Representatives, decided four years ago to drop it all, and sell his belongings, to hopscotch across the globe to talk to whomever he could meet.

His mission wasn’t just to talk to people he didn’t know: it was to encourage others to do the same. And by doing so, hopefully bring a little more understanding to the world.

While walking his talk, he eventually created a not for profit organization called I Talk To Strangers—built to unite everyone through conversation.

Since his journey began, he has garnered scores of media interviews across world.

A documentary has been filmed about his endeavours, chronicling his trek and the people he has met, to be screened in the fall.

I Talk To Strangers has successfully united those from across the social, demographic, religious and ethnic spectrum through conversation, enriching dialog and understanding.

With its partner Pelumingo, they now have offices in Poland, Malaysia, Romania, the US, Canada (as of February), and informally in dozens of countries across the globe.

Stokes has already partnered with Google and FedEx, who have assisted in the creation of various community initiatives in the US.

Stokes returns to Canada to present his first Markham speaking engagement May 16 at the Varley Art Gallery, where he’ll talk about what his global journey has taught him, how to reach out across our neighborhoods, and how these lessons can help our communities minimize bullying.

Not to rest on his laurels, he’ll also talk about his organization’s forthcoming Canada Peace Walk, to take place Labour Day, Sept. 5, in Toronto, expected to bring those from across all communities together.
“We could solve many of our problems if we made an effort to meet and learn from strangers,” remarked Stokes. “We can look beyond preconceived notions and stereotypes and seek to find areas of agreement.”

To view the documentary, visit tinyurl.com/RobbieStokesJr

In discussion with: I Talk to Strangers executive director, Robbie Stokes Jr.