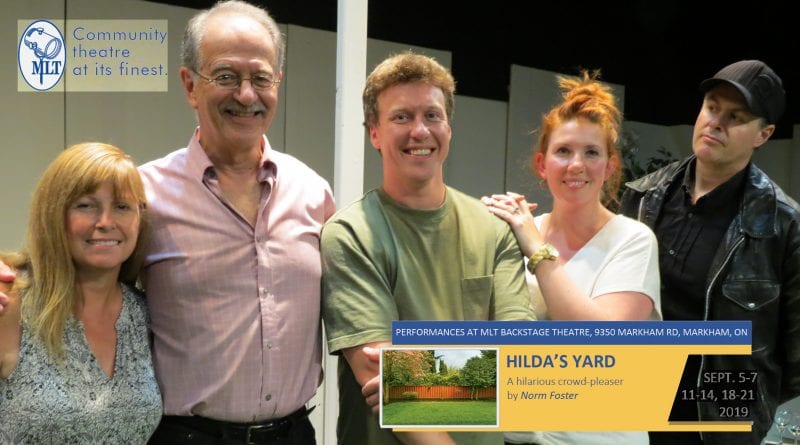 To kick off its 53rd season, Markham Little Theatre is looking back to 1956, a full decade before the company itself came to be, with Hilda’s Yard.

“At the outset, the show has a very simplistic 1950s feel to it, think of Leave it to Beaver or Father Knows Best,” says the show’s director Judi Cragg. “But, as the layers are peeled away, what we see are the very real, somewhat dysfunctional dynamics of this family who, at their core, truly love and care for one another.”

“This play is definitely a comedy, but with an underlying theme of relationships, especially within families, “says Cragg. “ I think everyone can relate to both the joy and pain that these relationships can bring us.”

“Foster creates heart-warming, and sometimes heart-wrenching, situations with characters who are funny and relatable,” adds the show’s co-producer Sarah McDonald.

The story looks in on Hilda and Sam Fluck, a couple just beginning to enjoy life with a newly empty nest. Their idyllic future is cut short as a chain of events brings each one of the children ‘hopping the fence’ into Hilda’s yard and are suddenly back home for unexpected and extended stays.

The troubles suddenly visited on the Flucks range from divorce to trying to outrun organized crime. The family has to learn to straddle generational gaps, communicate constructively, and how to outsmart criminals. For the Flucks, father just doesn’t know best, so Hilda has to hold the family together.

“Our audience will definitely connect with this family,” says co-producer Michelle Browne. “Humans are the only species that will take their kids back after they’ve left the nest. That was true in the fifties, and is even more prevalent today.”

Hilda will be portrayed by Marlene Foran most recently starred as Annie in MLT’s 2018 production of Calendar Girls, and directed their production of Bench in the Sun. Harry Hochman as Sam and Steve Birtles as Beverly last appeared in 2019’s The Mousetrap as Paravicini and Sergeant Trotter, respectively.

Tristan Stansfield who was in MLT’s most recent Norm Foster play (Skin Flick) just last spring plays the son, Gary. While the role of daughter Janey is handled by Lisa Meers, who was last on stage for MLT in Bedroom Farce.

The cast is rounded out by Jaime Oren as Bobbi, who is returning to MLT after a bit of a hiatus, last appearing in 2013’s Sunshine Boys.

“I couldn’t be happier with our cast,” says Cragg. “They are each inhabiting their character so perfectly, which makes the comedic moments that much more amusing, and the poignant moments more touching.”

Of course, Markham Little Theatre treasures its long-standing relationship with the Flato Markham Theatre and still produces the majority of its shows there, but a tradition of performing the first show of the season in a smaller setting at the Markham Museum began two years ago. Hilda’s Yard will be staged at the museum in September.

“It’s a wonderful space – not a bad seat in the theatre,” Browne says.

The company converts its rehearsal space into a performance venue and offers three full weeks of shows to allow its audience a chance to get one of the, more limited, 90 seats. This style of show brings to mind the history of off-off-Broadway shows in New York City being put up wherever they might fit.

“This will be our third production here, and it is a beautiful way to open the season,” McDonald adds.

If this seems like an emotional sentiment for a producer of community theatre, you probably don’t know a lot about Markham Little Theatre. Among the oldest such companies in Ontario, the group really does regard themselves as a family. It shows in their dedication too.

“I feel incredibly lucky to have found this place and this wonderful group of creative individuals,” McDonald says. “Simply put, MLT is a wonderful place to spend some time.”