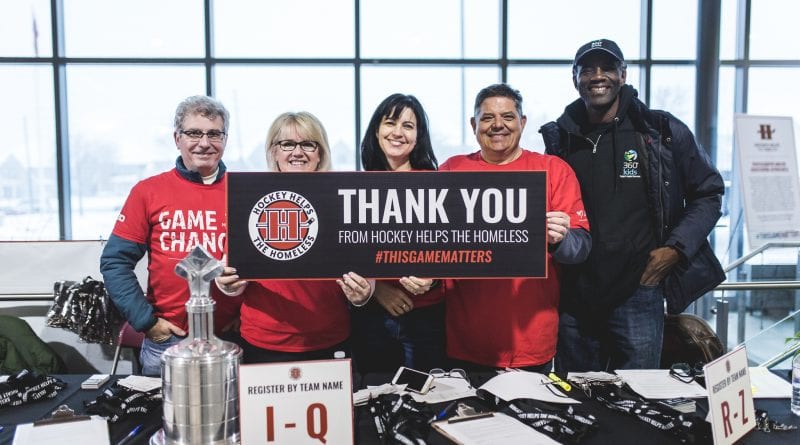 It’s a chance to suit up alongside former Stanley Cup winners and Olympians as well as raise money for an important cause.

Hockey Helps the Homeless, which has been running for over 20 years, has their York Region event coming up in Markham on November 15.

With both a men’s and women’s division, the brainchild of Gary Scullion has grown from an idea to a nationwide fundraiser.

“Hockey Helps the Homeless effectively started in 1996 when a group of Toronto businessmen saw an opportunity to turn a small, corporate tournament they had at Maple Leaf Gardens into something bigger,” said Scott Page, director of hockey operations. “Gary Scullion started the organization and the funds they raised at this event went into survival packs. They went around downtown Toronto and handed them out to people they thought were homeless at the time.”

The current format, which involves former pros, was brought about by former Leaf Mike Gartner shortly after he retired.

“He got involved and suggested they turn these into pro-am hockey tournaments,” Page said of the 708-goal scorer. “From there, we began to build a network of former NHL players, female Olympians, and now, we have 14 events across the country from Vancouver to Halifax, raising over $16 million, with over $2.65 million in the last year alone.”

The York Region event raises money for 360ºkids, which helps homeless and at-risk youth in Markham and beyond.

“360ºkids provide a full range of support services, and at the end of the day, at Hockey Helps, we believe that every kid should have a safe place to call home and the supports they need,” said Page, who mentioned that Hockey Helps has held a partnership with 360ºkids for the past 10 years. “We’ve got an opportunity to support youth, women, children, and men across the country.

“It started at such a grassroots level, and now it’s morphed into what it is today, supporting such a variance of homelessness across the country.”

There will be a dozen men’s teams hitting the ice at Angus Glen Community Centre, and at least four women’s squads suiting up at Markham Centennial, with room still for a few more.

“All of our teams have come in, gotten their team sponsors, and all participants have a minimum needed to be raised by puck drop on the day of,” Page said. “Folks are raising anywhere from $500-15,000, if not more. There’s an opportunity for the public not only to watch on the day of, but to support them by donating on our website.

“It’s three games of hockey, breakfast, lunch and dinner, a reception at Angus Glen Golf Club, and of course an opportunity to play with the pros on the day of,” Page added. “Everyone gets a custom uniform with name and number on it, all of the snacks and supplies in the dressing room. We’re really trying to give them that pro experience on the day of the event when they get to come in and play with the pros.”

Those players include the likes of Glenn Anderson, Mark Napier, Shayne Corson, Gary Leeman and Rick Vaive on the men’s side, with the women’s event bringing in current and former Team Canada players like Cherie Piper, Sarah Nurse and Natalie Spooner.

While getting to step onto the ice with a former NHLer is a thrilling proposition, this also affords the amateurs an opportunity to listen in on some of their old war stories from the past.

“Without a doubt, it’s an exciting experience for the amateurs and the pros enjoy it too, experiencing this with the amateurs,” Page said. “They share some stories on the bench, laughs in the dressing room, and hockey almost comes secondary to this. They love playing on the ice with them, but hearing the stories and sharing the camaraderie that hockey brings to these events, that our folks are here and excited for, it’s exciting for them.

Photo: 360 Kids CEO Clovis Grant (right) and volunteers from the York Region event are ready for another year of Hockey Helps the Homeless in Markham. Photo courtesy of Brandi Awad.