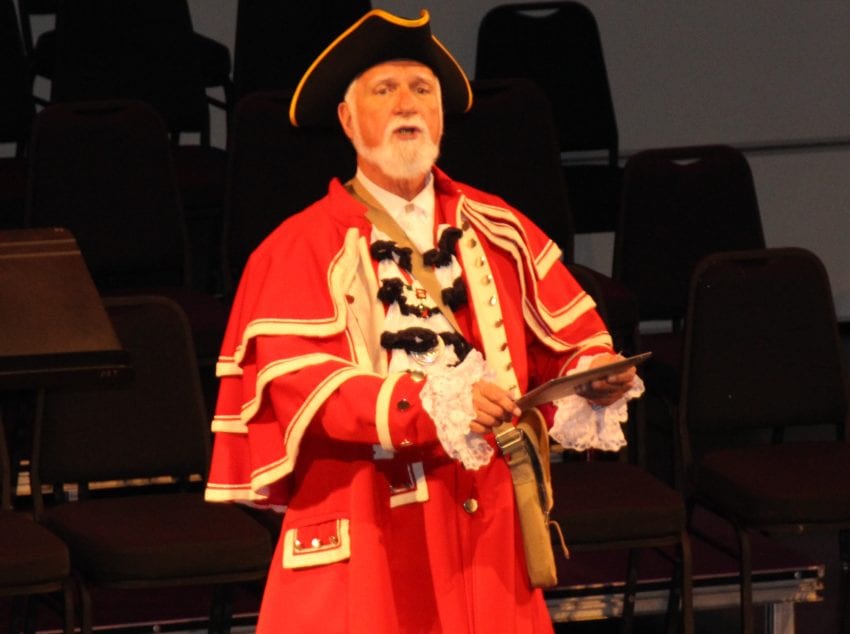 For 30 years John Webster has been informing the masses and delighting crowds.

When John Webster tilts up his tricorn hat, rings his bell and bellows a mighty proclamation, there is no need for a microphone.

“My mom said I was vaccinated with a phonograph needle and I can go on forever,” says Markham’s town crier, John Webster, with a roaring laugh.

Webster has the jovial demeanor of someone who appeals to all walks of life and punctuates his sentences with the word “golly.” He takes his job seriously, but not himself.

What started out in 1987 as an innocent way to point Markham Fair patrons to vendor booths turned into a lifetime commitment to his community for the ever-boisterous Webster.

As part of the fair’s publicity and concessions committee he was tired of handing out pamphlets just to see them dumped in the trash all over the fairgrounds. Webster took it upon himself to rent a town crier costume from Malabar, a theatrical prop shop, to make the throngs of people sit up and take notice. And that they did.

After emerging onto the fairgrounds with his crier kit on, he spouted off his very first holler.

“I scared the bejeebers out of some lady 15 metres away,” he laughs.

Her surprise turned into interest and she eventually appointed him officially through city council to be the town’s official crier. That startled woman was then-mayor of Markham Carole Bell.

Thinking that he would only cry a handful of times per year, Webster found himself as quite the hot commodity for all kinds of events around Markham.

“I was a great customer at Malabar by then, as you can imagine,” said Webster. “In my peak year I did 225 events,” recalls Webster. “There was a need and I was filling it.”

He does more than just shout about town, he’s part of the community all dressed in his red crier regalia, high socks, black pilgrim hat and a robust white beard.

But being an active crier means a costume change every ten years or so when the old one gets threadbare.

“This is a working outfit. You’re out there in the wind and the snow and the sleet and the rain and the gloom,” explains Webster.

Previous iterations of his costume have come from designers from the National Ballet of Canada and the Royal Canadian Mounted Police. Each time the costume changes a bit, but the overall structure and simplicity of his original (and historically accurate) costume stays the same.

Over the years Markham has had to officially share its popular crier with other towns. To this day Webster is the town crier for East Gwillimbury, Aurora, and Markham’s sister city in the U.S. Cary, S.C. And, unofficially Webster has been made an honorary crier for the Yorkshire village of Edlington, U.K.

“I get borrowed all over the place,” explains Webster.

His stature in the community has allowed him to rub shoulders with high dignitaries, including the highest of them all, Queen Elizabeth II and the Duke of Edinburgh. He shook hands with the Duke and had a chat about town criers in Canada.

“It was such a dramatic experience I don’t think he’s washed his hand since!” says Webster with a giggle.

The town crier is a senior official of the community, and represents the Crown. In 1982 when Pierre Trudeau patriated the constitution transferring the country’s highest law from the authority of the British Parliament to Canada’s federal and provincial legislatures the rules surrounding town criers was also transferred.

“I got a traffic ticket and I tried to explain to York Regional Police that I represent the Crown and that giving me a ticket would be an act of treason,” says Webster. He paid the ticket.

With those credentials under his old-timey belt, Webster has gone on to host several town crier competitions, and has brought countless trophies back to Markham for his oratory abilities.

Happily Webster is enjoying his post so much that he’s planning on stepping down for a long time.

“I intend on being the crier for as long as they’ll have me. My goal is to live to 100 or die trying,” jokes Webster.

If you want to catch a glimpse of what a town crier festival looks like, there will be a cry-off competition at the Markham Village Festival this summer on June 17th.

“But, bring your earplugs,” suggests Webster.