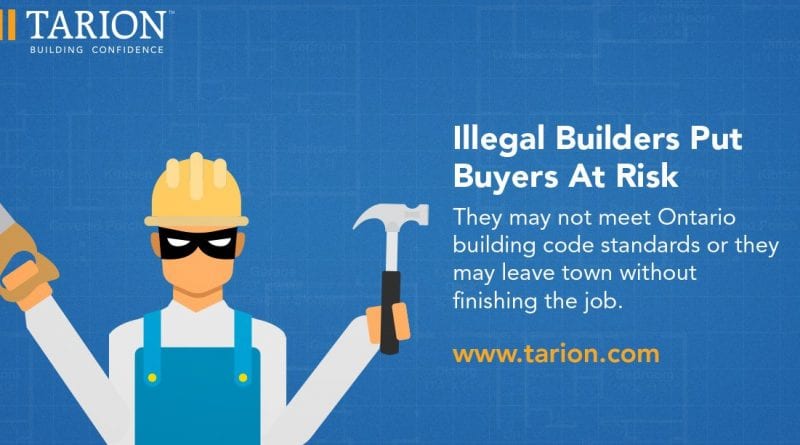 The not-for-profit corporation today released figures showing that in 2018, 74 investigations were launched into builders who failed to register new homes with Tarion, which administers and enforces the Ontario New Home Warranties Plan Act. There were also 108 convictions in provincial court and 117 the previous year. Every builder in Ontario must be registered with Tarion and enroll all newly-built homes in the New Home Warranty Program, which provides a seven-year warranty to protect homeowners from unscrupulous builders and building defects.

“Illegal builders can put homeowners at risk because they may not comply with the Ontario Building Code, may do poor quality work leading to extensive defects – or could even take a buyer’s deposit and then abandon the build,” says Tanya Gibson, Tarion compliance and investigations director. “When a home is built by an unregistered builder, the homeowners may not even know they’re entitled to a warranty including deposit protection from Tarion.”

In the past year, penalties have doubled to $50,000 for convicted builders as well as directors and officers of delinquent companies. Potential jail terms have doubled as well, to a maximum of one year less a day. Corporations now face maximum fines of $250,000, up from the previous $100,000.

“We take this very seriously,” says Gibson, in regard to the stiff penalties.

The vast majority of municipalities in the province share building permit information with Tarion to help identify illegal building activity. Also, 15 municipalities have partnered with Tarion for a pilot project aimed at preventing illegal building by educating consumers who opt to take out permits themselves instead of using a registered builder. As part of the pilot, consumers who want to build their own homes receive an education package and must request a letter from Tarion confirming they are, in fact, an owner-builder.

“In Ontario, it is perfectly legal to build your own home,” says Gibson. “But, you do not have a warranty.”