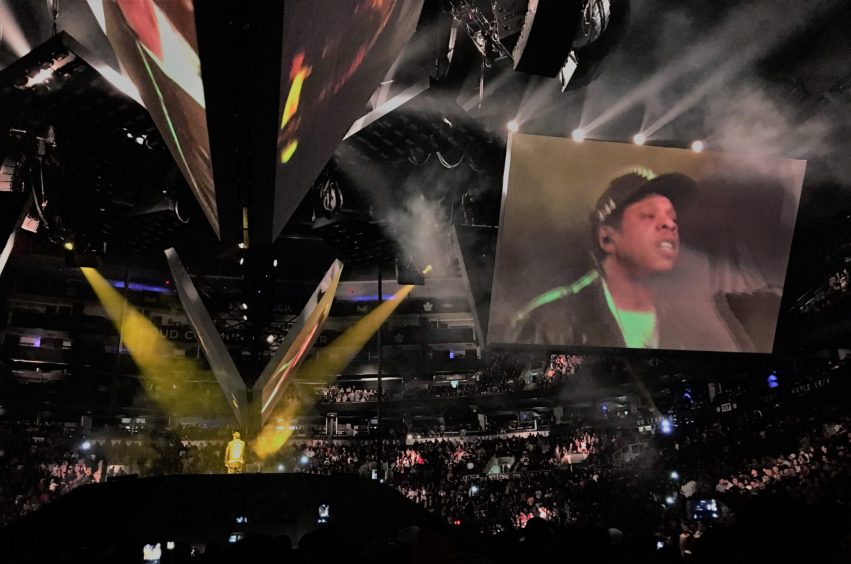 Rap powerhouse, Jay Z (aka Shawn Carter) performed the first of two shows on his 4:44 tour stop at the Air Canada Centre in Toronto last night, delivering hit after hit. Apart from high energy opening act Vic Mensa and his two-piece band, Jay Z held the stage on his own the entire time.

He opened the show with one of his new songs, Kill Jay Z, from the 4:44 album while turning the video screens into an octagon inspired illusion. His creativity and minimalist stage presence were also paired with strong beats, lyrics, and music to match.

Fans were treated to all-time hits like No Church in the Wild, Run This Town, Izzo, On to the Next One, 99 Problems, Niggas in Paris, Empire State of Mind, and Hard Knock Life. Without any pomp, pageantry or special guests, Jay Z managed to make a 90-minute set feel like 40 minutes at the end of which he revealed his live band playing in a pod underneath the moving octagonal stage.

The show ended with a heartfelt tribute to Chester Bennington, with whom he recorded Encore and performed it live against the backdrop of fans holding up their flashlights. In the end, Jay Z belted out 30 tracks, both new and old, one after the other without any wardrobe changes, bells or whistles and did so powerfully.

(Pictured above: Stage scene of Jay Z performing at the Air Canada Centre in Toronto Nov. 22 on the 4:44 tour)