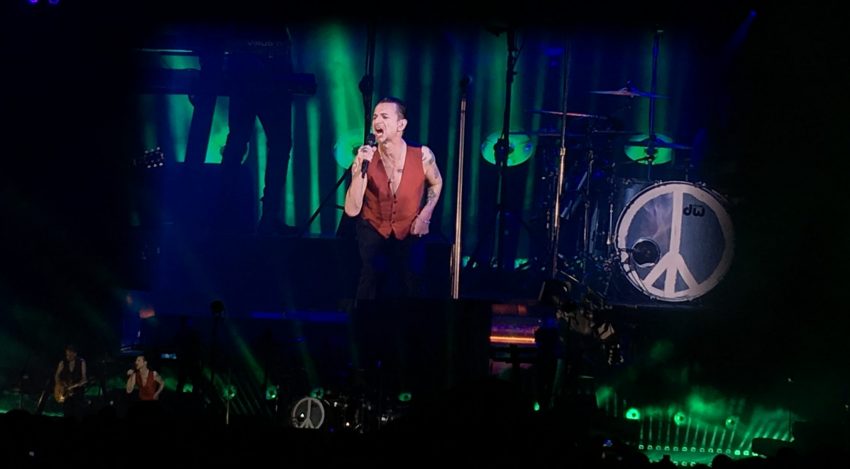 Depeche Mode stopped at the Air Canada Centre (ACC) in Toronto last night, their first time since 2013, on the their Global Spirit Tour and to a full house of die hard fans.  The spirit was evident throughout the evening with band members in top form with an on-stage camaraderie that was heartwarming after 30 years together.

They kicked things off with an instrumental video intro preceded by the Beatles’ song, Revolution, and followed by new and more recent music like Going Backwards and So Much Love from the Spirit album. The band also incorporated the classic rap styling of Grand Master Flash during 1997’s Barrel of a Gun followed by some more new and more recent music.

Every song encompassed their signature sound and felt familiar, even if it wasn’t, and then the audience roared when they started delivering their roster of hits and classics. World in My Eyes from the album Violator was followed by an acoustic rendition of A Question of Lust, performed by Martin Gore and was the first time he took centre stage all evening.

Other long running faves they performed were Everything Counts, Enjoy the Silence, Never Let Me Down Again, Somebody, Walking in my Shoes, I Feel You, Personal Jesus and a nod to David Bowie with Heroes. The audience took over the vocals more than once, and were handed the mic by lead singer Dave Gahan who affectionately pointed at the crowds from all points of the stage.

It was a show not to be missed, and for anyone who did…hopefully you’ll get another chance in a few years if their touring history is anything to go by.