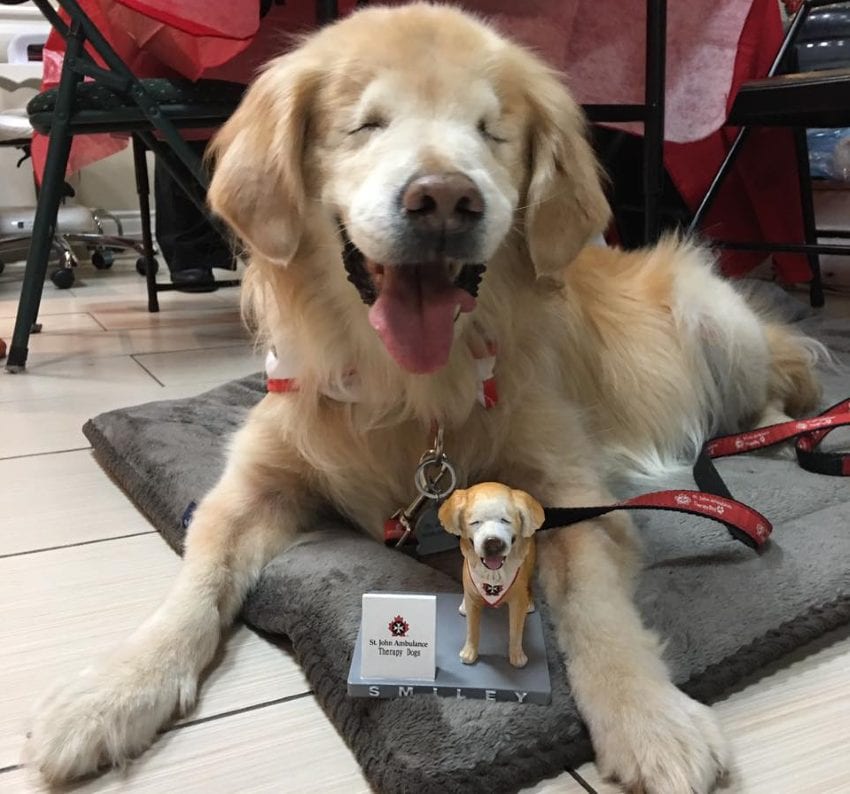 Named Stouffville’s citizen of the year, this sweet dog has brought his message of love and acceptance to his community and beyond.

Not many of us can say that we began our careers late in life, but the stacked social calendar and impressive accolades of this hard-working pup sure put many of us to shame, and he does it all with that effortless handsome grin.

Smiley, a 15-year-old golden lab born without eyes, stole hearts around the world after skyrocketing to social media famedom two years ago when his owner Joanne George shared his lust for life on Facebook and Instagram.

With honours from the Stouffville Lion’s Club, the RCMP and the Governor General under his collar, Smiley was shown some serious hometown love last summer when he and George were jointly named Stouffville’s Citizens of the Year by the Sun-Tribune.

“It has been such an honour,” says George, the professional dog trainer. “Every owner loves their dog to death and thinks that they’re the best pet in the world. But, then imagine that millions of people around the world thought the exact same thing about your dog.”

Though his fame has taken him on trips around North America, what he, and his owner, truly love doing is helping this community through spreading their message of acceptance in schools, nursing homes and local events.

“He loves the kids. He’s almost completely deaf, but he can hear higher frequency voices and he responds really well to the little giggly kids. He really, really loves it. It really perks him up,” says George.

Smiley was one of 15 dogs plucked out of a puppy mill by the SPCA in 2004. The gentle dog had bite marks covering his face from the others who preyed on him due to his blindness. George, who was working as a vet technician and was part of the rescue efforts, endeavoured to find him a forever home but took him in herself when she found that no one would adopt the handicapped dog. “No one thought that a blind dog could make a normal pet,” says George. “Smiley was a pioneer, in a way, for disabled dogs who have done great things.”

The dog trainer has now taken his sad beginnings and spun it into a strong anti-bullying campaign.

“Because he was born without eyes, the other dogs picked on him. I see it in the kid’s faces that they’re making that correlation to someone they may know in the next classroom who is different. I really feel that the students I speak to are not going to be bullies.”

Stouffville’s furry citizen of the year even has his own line of swag, to help spread his message, such as t-shirts and bobbleheads. Fans can now bring Smiley to places he’d never be able to travel otherwise.

According to his vet, the St. John’s Ambulance therapy dog is in wonderful health and shows no signs of slowing down. The happy dog recently eased the transition for a new addition to the family who is also a blind rescue. Pal, a puppy adopted from the streets of Turkey (ironically arriving in Canada on Thanksgiving), has shown some promising signs of following in Smiley’s paw prints.

“What I’ve learned from Smiley, I should really use it to benefit another one. I’ve always thought that. With Smiley’s age we have to be thinking that he’s getting way up there,” says George.

Pal had a rough transition from the streets to a comfortable home, but with the help of well wishes and blessings from Smiley’s online community, and his own growing fan base, he is now a healthy happy puppy. You can follow his story on Instagram @thegoldenlifeofpal.

Smiley has hobnobbed with Dog Whisperer’s Ceasar Milan, delighted The View’s TV host Meredith Vieira and has even held court with Desmond Tutu and our prime minister, Justin Trudeau.

If you want to meet the citizen of the year with the contagious smile, you can find him at the Canadian Pet Expo April 13-15, the Turner Syndrome Society of Canada’s 36th annual conference in Toronto April 29 and Woofstock May 27-28 at Woodbine park in Toronto.

Photo: Smiley has a line of swag including bobble heads in his image. (Facebook)