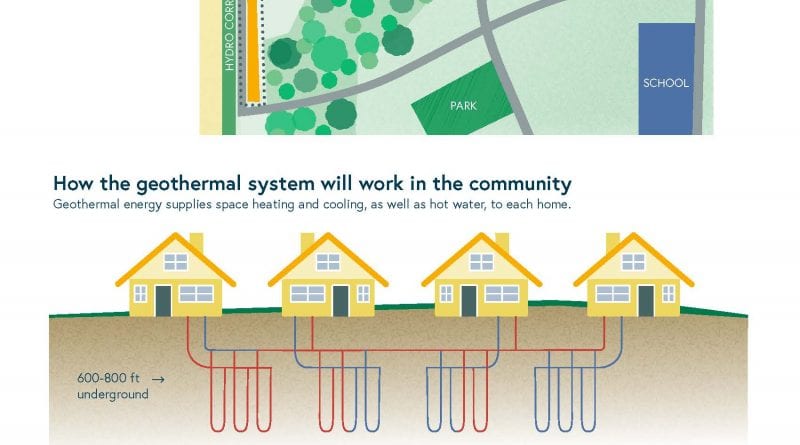 The City of Markham is going geothermal in 2020.

Already well known for the Markham District Energy System (MDE), North America’s first District Energy system to combine the use of hot water for heating, chilled water for cooling and combined heat and power (CHP), and having solar panels on all of their municipal buildings, Mayor Frank Scarpitti says there’s another environmental initiative beginning in 2020 to be excited about.

Starting this year, in the new area of Markham, they’ll be actually using a geothermal system to provide the heating for a low rise development. The system will use the heat from deep within the earth to warm and cool the homes, planned for the Berczy Glen neighbourhood in the area of Elgin Mills and Warden Avenues.

“It’s been done in other parts of Canada. I’m not sure to the same extent that we’re proposing here,” the Markham mayor explained. “This will be 300 homes in this new expansion area, and that system will be harnessing the earth’s energy to provide the heating for those homes. We’re excited about that and hope that gets launched in the latter part of 2020.”

The city is also continuing its Trees For Tomorrow program. Over 400,000 trees have already been planted and they’re aiming to plant another 10,000 trees within Markham this year.

Also beginning this year, Scarpitti says, will be a concentrated effort to go and prune all of the trees that are on public property.

“It’s a multi-year program, but our hope is to tackle and make sure we both prune and evaluate every single tree that is on public property,” Scarpitti said. “That’s in the right of ways on streets, it’s in the parks, the boulevards and pruning them, and making sure they’re healthy.

“It’s an important part of increasing our tree cover in the city.”

Scarpitti says concerns about the environment and what the city is doing to address issues is something he often hears about from local residents.

While he doesn’t want to take away from any of the resolutions that are being passed about the climate emergency, he applauds this council and our previous councils for really working with various community groups.

“The strides that we have made in the environment – in not only protecting it, but being a more sustainable community – these resolutions are nice, but at the end of the day where I measure governments and organizations is results and the question is pass all the resolutions that you want but what are you doing?

“I think in Markham we’ve demonstrated that, whether it’s everything from the millions of dollars that we’re putting into flood protection, going into older neighbourhoods and increasing the flood protection, which we included money for again in our budget for this year,” he said. “Whether it’s the trees, as I’ve said 400,000 trees since 2007 that have been planted in the community, whether it’s the highest aversion rate in all of Canada with our waste system and providing greater opportunities through our textile recycling program which has been very, very successful.”

Earth Day continues to be an important day in Markham, but while the city continues to celebrate and make a big deal of it, Scarpitti says in many respects every day has become Earth Day here.

“That one day we make such a big deal about, I would say it’s really the focus on so many different fronts has really resulted in a lot of environmental protection in advancement in the city,” he said. “So resolutions are good, they make a statement, but at the end of the day I look for results and what have we done.

“I think we’ve got an amazing track record here in Markham working with our residents and various stakeholders to give people the proper opportunities to be able to be a more sustainable community.”

For more details about the builder, visit www.mattamyhomes.com/about-us.

Photo: Starting later this year, they’ll be actually using a geothermal system to provide the heating for a low rise development in the area of Elgin Mills and Warden Avenues.