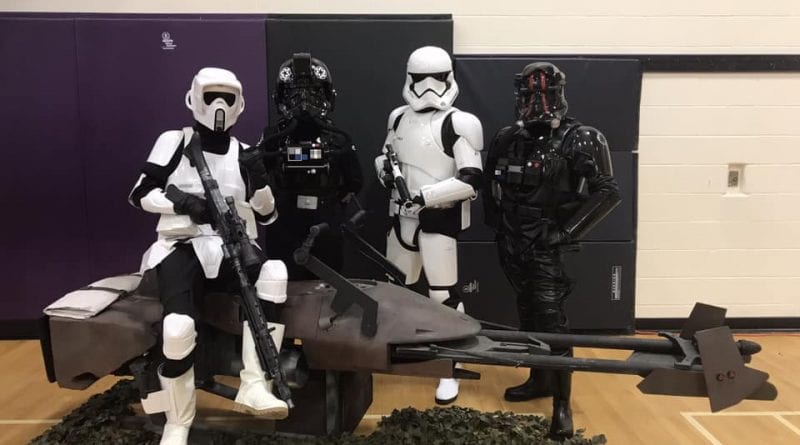 Calling all superheroes, stormtroopers and steampunks. Markham’s self-professed geeks needn’t stray far this year to celebrate all things comic and science fiction, as the city is getting its first ComiCon.

This latest addition to the growing number of cities across North America playing host to the popular exposition comes courtesy of Pop Culture Canada, a group that runs similar events throughout the province, from Brampton to Bowmanville and beyond.

After what organizers call a successful event in Thornhill last year, there was enough interest in Markham that it was high time for the city to get its own, said event manager David Wyldstar.

“Pop culture is everywhere today,” he said. “Events like this are a safe haven for nerd and geek culture. It’s the one place and time where you can meet and interact with like-minded individuals and have fun, make new friends and, most of all, find cool stuff.”

While ComiCon events started out, as the name suggests, to celebrate the universes familiar to comic book readers, they’ve since expanded to be celebrations of many areas of fiction where characters are compelling enough for cosplayers—a portmanteau for costume players—to suit up and have fun.

This means Markhamites are likely to see anyone from Superman to Darth Vader to Shaggy and Scooby Doo roaming around on April 7.

The event runs from 10 a.m. to 4 p.m. at the Monte Carlo Inn / Savoy Event Venue on Warden Ave. Admission is $5, though patrons are encouraged to bring canned food to win comic-themed artwork and other prizes. Proceeds from the event will support the Markham Food Bank.

Some of the purists might try to don only costumes from certain comic universes but, organizers say, the purpose is really to have fun. Whether you want to dress up as a character from Star Wars, Pokemon or Batman is up to you, though guns—even imitation ones—are banned, as well as glass or metal weapons.

Wyldstar said it’s important to have a climate where the most dedicated fans and those with more of a passing interest in fan culture are just as welcome.

“It’s a very casual atmosphere,” he said. “If you are a die-hard (fan) or just curious, this is the place to check out.”

He quipped the events typically welcome anyone from ages five to 85, but noted ComiCons are becoming especially popular with families.

A number of vendors of collectables, artwork and products you might not even know exist will be on-site. There will also be special activities, such as photography in front of a green screen for “awesome cosplay shots,” as well a meet-and-greet with Star Wars characters from the local chapter of the 501st Legion, a popular network of Star Wars costume enthusiasts.

Given the rising popularity of ComiCon events—tens of thousands attend Toronto’s ComiCon and Fan Exco—vendors will be coming from across the province to Markham’s first ComiCon, which Wyldstar anticipates will bring out as many as 500 people.