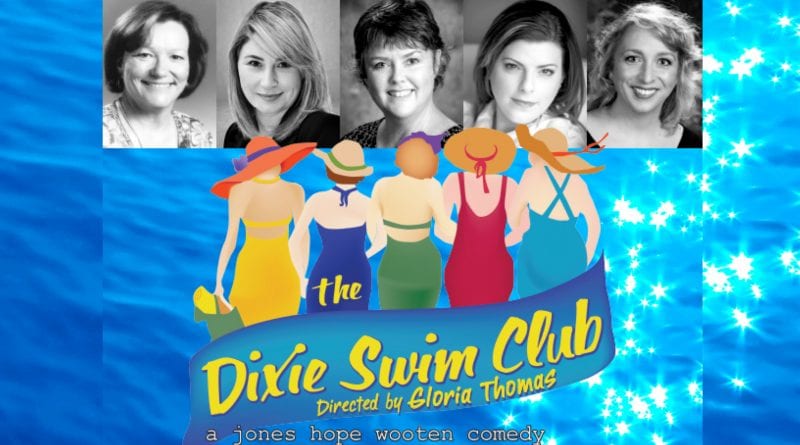 Friendship is an amazing thing. Seemingly random people come into and out of people’s lives, and somehow become the ones they turn to in times of joy or crisis.

This truth is the backbone of Markham Little Theatre’s third show this season, The Dixie Swim Club.

“The story revolves around five women who are able to laugh, cry, tease, support, argue, and love each other throughout their lives,” says Markham Little Theatre’s President, Sarah McDonald. “This play allows us a glimpse into the friendship that they treasure.”

The play, written in part by a former writer and producer for TV’s The Golden Girls named Jamie Wooten, follows the annual tradition of five southern women who meet at a cottage to recharge their friendship that began years ago on a college swim team. The audience gets to see four of those weekends, spanning a period of 30 years.

“When our play reading committee read the script, they were unanimous in the opinion that The Dixie Swim Club would be a great choice for our audience,” says McDonald. “The play is both heartwarming and hilarious, and we are excited to bring it to the Flato Markham Theatre in February.”

“There are so many great lines, both funny and touching,” says the show’s producer, Judy Atherton. “However, even though I’ve heard them so many times in rehearsal already, I still laugh every time.”

Markham Little Theatre patrons will recognize three of the actresses from the show’s cast too. Kerry Harman and Nicky Marsh were both seen in the 2018 production of Calendar Girls and Lisa Meers, who recently starred in September’s Hilda’s Yard. Victoria Curran, who has also acted with MLT in the more distant past and Samantha Perrone round out the cast.

“We have a very talented cast,” explains the show’s director, Gloria Thomas. “They’ve formed a strong friendship during our rehearsals, which helps to make the play a strong ensemble piece.”

“I think the deep friendship ties really allow the audience to connect to the characters,” adds Atherton. “The actors in this show connect on and off the stage, and the audience will be able to feel it.”

When one considers that a community theatre company that has been around for more than half a century, like MLT has, relies on strong friendships much like those in the show for its very survival, both with its members and its audience; this show seems even more appropriate.

“Our members give generously of their talents and time as builders, painters, actors, costumers, props people, directors, stage managers, hairdressers, marketers, sound and lighting designers,” says McDonald. “We all have, the connection shared by the ladies of The Dixie Swim Club.”

Of course, one of the unique challenges of this show is that it spans a long period of time. The characters will age from 40 to 70. Costumes and make-up will need to be a quick, choreographed scramble to make it all work.

“There’s an exciting flurry of activity that goes on backstage during any play,” continues McDonald, “but this one is going to be extra interesting!”

By the time The Dixie Swim Club opens, a few dozen volunteer creatives from Markham will have contributed to it. Nevertheless, the club that is MLT is always open to new members.

The work might be fun but this group always aims for the product to be excellent as well.

“It’s a lovely and touching comedy,” says Thomas. “It will be a real audience pleaser!”