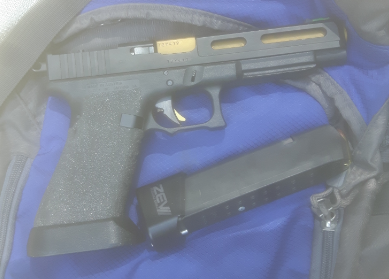 York Regional Police seized a loaded pistol following a Markham home invasion robbery in which three adults were tied up and one was assaulted.

Two children were in the Legacy Drive home near 14th Avenue and Box Grove Bypass at the time of the robbery, which took place Saturday, July 26 shortly after 2 a.m.

With the help of the canine unit, officers arrested two men seen running from the home when they arrived on the scene. A short time later, two additional suspects found walking near Hwy. 407 and Ninth Line were also arrested. During an evidence search, police found a loaded glock under a parked vehicle nearby.

Roowens Marcelin, 21, Kenron Deacon Matthews-Bishop, 18, and Zongyu Li, 21, all of Toronto, and Wei Hang Shi, 22, of no fixed address, have each been charged with robbery with a firearm.