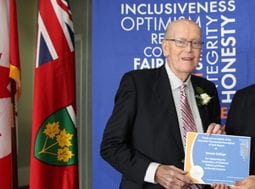 Donald Cousens, father, exemplary community leader and dedicated friend died peacefully with his children at his side on Thursday, February 23, 2017 at Markham Stouffville Hospital.  He leaves the legacy of many accomplishments and meaningful relationships.  Predeceased by his loving wife, Aline (July 29, 2016), Don is survived by his cherished children, Mary and Paul, their spouses Kevin and Lesley and his three grandchildren, Suse, Charlotte, and Drew.

He was educated at Queen’s University and received a Master of Divinity degree at Knox College, University of Toronto.  He was an ordained Presbyterian Minister and an officer of the Canadian Armed Forces.

Prior to entering public life, Don worked for Honeywell Limited in a variety of progressively responsible positions, including Branch Manager, Sales Manager, and Assistant to the President

He was first elected as a School Board Trustee in Penetanguishene in 1965-67, and later as a Trustee for the York County Board of Education (now known as the York Region District School Board) from 1972-79.  He was Vice Chair and Chair in 1978 and 1979 respectively.

As an MPP, Don successfully achieved approval for the establishment of Markham Stouffville Hospital and Highway 407, extension of GO-Transit service through Milliken-Unionville-Markham, advocated for Rouge Park, and against establishment of “mega-dumps”, and was a strong vocal advocate for such local projects as Unionville High School, Milliken High School, Markham Theatre, Thornhill Arena, Fletcher’s Fields, Centennial Arena, and others.

Don was elected as Mayor of the Town of Markham for four terms from 1994-2006, and served on York Region Council during the same period.  He was Chair of Finance from 1997 to 2000, a member of the Markham Hydro Board from 1994-2000, and the PowerStream Board from 2000 to 2007, the Board of Markham Stouffville Hospital from 1994-2002, and was an Honorary Life Member of the Markham Board of Trade.  Don was the founding Honorary Chair of the York Technology Association.

Don was Honorary Chair of the Markhaven Home for Seniors, Unionville Home Society and Yee Hong Wellness Centre Fund Raising Campaigns, and was the founder of the Markham Prayer Breakfast.

He received many medals and honours, including the YMCA Peace Medallion and the Queen’s Diamond Jubilee Medal for Community Service in 2012.

Don was known and respected for being the Founding Chair of the Markham and York Region Character Community Councils and activities.  As part of his work on this initiative, he co-authored “Building Character:  A Community’s Success Story.”

“Don will be remembered for his commitment to public service and genuine ability to lead change,” said York Region Chairman and CEO Wayne Emmerson. “As one of the founding members of the Character Community Foundation, his dedication and belief that good character makes a positive difference in building strong communities will live on.”

The City of Markham is providing the opportunity for people to pay their respects and sign a Book of Condolences at the City Hall on Wednesday, March 1 from 9 am to 5 pm in the Canada Room.  Visitation will be held on March 1 from 6 – 9 pm at Angus Glen Golf Club, and a memorial service will be held there on March 2 at 1 pm followed by a reception and light refreshments.  Online condolences may be expressed at www.chapelridgefh.com.  In lieu of flowers the family would be delighted if you made a donation in Don’s memory to Markham Stouffville Hospital Foundation.