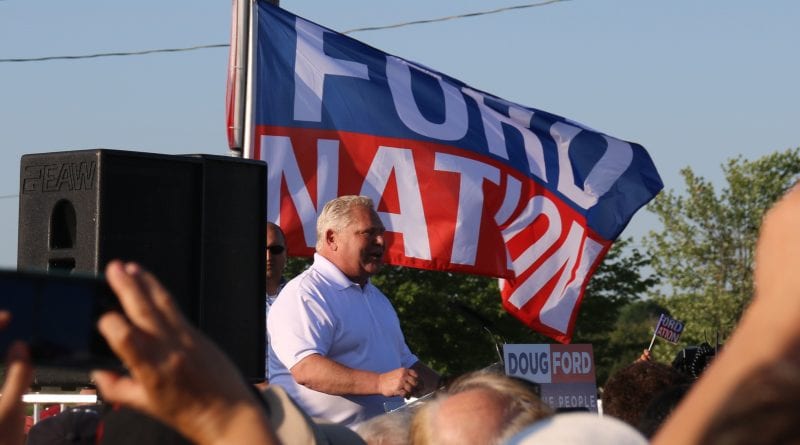 The Premier had a tumultuous week but it all seemed to end well at the first Ford Fest to be held outside of Doug Ford’s mothers’ backyard in Etobicoke. Good thing he made the move as it was a sure thing that his mom’s backyard couldn’t handle the 10,000 or so people that showed up at the Markham Fairground this weekend.

After getting booed at the Raptors celebration, overhauling his cabinet, calling back two egregious appointees made by his chief of staff and then firing said chief of staff, Dean French, the cheers the Premier basked in from the large and multicultural audience were, no doubt, a welcome change. Even the weather cooperated as thousands lined up for a free burger and drink, while enjoying fraternizing with like-minded political types and kids enjoying the Ferris wheel, jumping castle, other rides and jumbo freezies.

Of course, the main attraction was Ford himself and he did not disappoint giving a short-ish 15 minute speech trumpeting the miracles of his government including having created over 190,000 jobs than this time last year.

Ford He said ” we are putting more money back into your pockets, we have scrapped the terrible cap and trade cash grab – the biggest cash grab we have ever seen….and we ended the awful, awful Drive Clean program.” He went on to

claim savings from other cancelled programs and highlight his efforts to pay back the provincial deficit, cutting “hallway health care”  and wait times as well as promising to open up 30,000 long-term care beds over the next 8 years.

In his address Ford also lambasted the media for distorting the central items of his recent budget noting that the overall spend on healthcare and education was more than any government had ever spent in the province but lefty news outlets only focused on narrow places where funds were shifted from, not to.

To be sure, avowed Liberal-leaners like the Toronto Star have picked at the budget cuts, or shifts, with ruthless efficiency, but the PCs did themselves no PR favours with the initial messaging and distracting stories around Dean French’s behaviour and his control of the messaging from the government and over MPPs.

When asked about French, a number of MPPs were politely evasive about the recently departed but the general impression was that all seemed clearly relieved that he was gone and optimistic that this was a new start to the rest of the term and they could get into their ridings and start working on issues this summer instead of defending flawed delivery

A few token protests disagreed with Ford’s sunny assessment, including a the plane dragging a banner objecting to education cuts that circled overhead just before Ford’s speech, a rolling billboard truck on Elgin Mills with the same message and a number of signs up McCowan Rd. leading to the grounds reminding attendees they disagreed with the new funding formulas for families with kids with Autism.

But those few distractions did nothing to detract from the positive vibe of the evening. Indeed it seemed that with all the brouhaha of the previous week, MPPs who mingled aplenty with the crowd in their “MPP for the people” t-shirts were all smiles and looking forward to a new start. Local MPPs were all there including Markham-Thornhill MPP Logan Kanapathi, Markham-Stouffville MPP Paul Calandra, who was newly elevated to house leader and Markham-Unionville MPP Billy Pang who introduced Ford to the crowd who were visiting his riding. But so were some demoted ministers like Caroline Mulroney and former finance minister Vic Fideli who was all smiles and looking rather relieved to be out of the hot seat that is Finance.

Notably absent though were any people connected with the federal Conservative party as they try to forge their campaign apart from anything that happens provincially in Ford Nation.

But Ford, who was clearly in his element, smiling and taking pictures with the assembled was hoping for the same kind of restart his MPPs did and continued to re-enforce that his government will “always listen to the people.” Hopefully that includes listening to his MPPs going forward, the ones elected by the people.

But, for the moment, it all seemed good and all was well in Ford Nation. 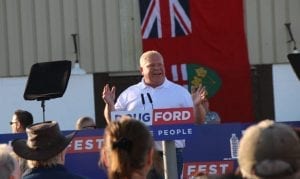