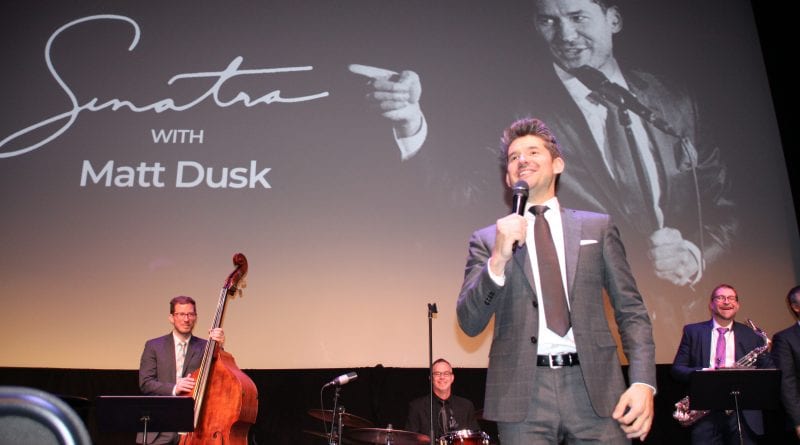 The Flato Markham Theatre recently launched the lineup for its 2019/20 Diamond Season with live performances from select artists who performed at a post-launch reception. It was an opportunity for guests to get up close and personal with the performers and be among the first to purchase tickets and subscriptions to a host of world-class artists from a wide range of genres.

“Theatre is a reflection of who we are as a warm, diverse and inclusive community. This is where our story is told through creative, musical and dramatic expression and where we can share memorable experiences,” said Mayor Frank Scarpitti.

“It always feels great to be at the Markham Flato Theatre,” said sponsor Shakir Rehmatullah of Flato Developments.  “I am a Markham resident, and I try to teach my kids about coming to the theatre to see, to get involved and to learn.”

Eric Lariviere, theatre general manager, describes the theatre as “a space connecting people from all walks of life, all generations and all origins. A space where people enjoy their favourite artists and productions, a space where people discover new and artistically brilliant performances with loved ones and friends.”

Some of the major highlights include the Ontario premiere of Canada Ballet’s Jörgen’s Anne of Green Gables as well as their well-loved The Nutcracker. World music is represented by Afropop superstar Fatoumata Diawara as well as Ukrainian Euro-punk band DakhaBrakha, Middle Eastern, and Indian electroacoustic super group NIYA, and the classical-soul-dance fusion music of Grammy award-winning violinist Miri Ben-Ari.

Homegrown talent will be featured throughout the season with Hawksley Workman and Sarah Slean sharing the stage for a night and performances by Howie Mandel, Pavlo, Juno nominee JW-Jones, the Ontario Philharmonic conducted by Marco Parisotto and Toronto Concert Orchestra featuring Markham’s prodigy solo violinist Mercedes Cheung. Rounding out this talented group is beloved Canadian vocalist Matt Dusk who performs as part of the All That Jazz series.

“Our new show, Sinatra with Matt Dusk is a tribute to one of my heroes that I grew up with,” said Dusk. “Not only have I played with many members of his band, but I have also met his family members through the years. It’s basically to bring attention to the younger people who have never heard of Frank Sinatra. Most people under the age of 40 listen to Spotify or Apple Music, so I’m trying to bring him back and carry the torch.”

There will be lots of family fun, including Australia’s most in-demand circus-arts company C!RCA while Masters of Illusion is back by popular demand with a new cast of illusionists finessed in the art of deception.

The Nostalgia Series is also back with a fabulous lineup including performances like The Beatles – Let It Be.

Sunshine Concerts complements the regular lineup with its addition of some tribute shows including Jersey Nights featuring hits of Frankie Valli and the Four Seasons, A Very Merry Motown Christmas, Abbamania and British Legends 2. They also have a two-day Markham Comedy Festival scheduled for January with some proceeds going to the Markham Stouffville Hospital.

Prices and tickets for the 2019/20 Diamond Season can be found online at markhamtheatre.ca.