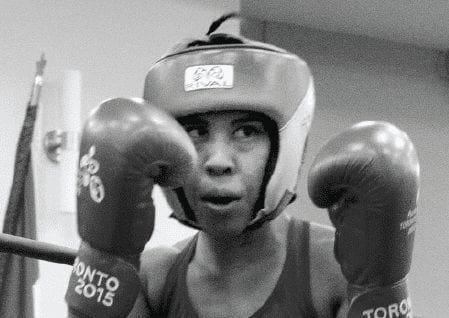 Which side are you on, east or west? The second annual Women’s White Collar boxing fundraiser event, presented by Undisputed Boxing and On the Button Promotions, features 12 women in an East Toronto versus West Toronto battle in support of the fight against Parkinson’s.

Lita Mae Button is a fitness and wellness coach at Undisputed Boxing, who trains women in the Rock Steady program. The program uses non-contact boxing techniques to help women with Parkinson’s disease. She started her training in Olympic-style boxing at the age of 25, while being a single mother. Her child was diagnosed with hemophilia, a life-long blood disorder and she used boxing as an outlet to deal with the events occurring in her personal life. She helps women with Parkinson’s build their bravery and spirit to deal with depression, cognitive delays and physical pain.

Studies estimate that more than 100,000 Canadians have this disease and about 6,600 new cases are diagnosed every year. Rock Steady Boxing is a specially designed program to aid Parkinson’s patients in building muscular and vocal strength through exercises such as hitting a bag and encouraging individuals to speak loudly and clearly. Boxing can boost their confidence levels and gives them a comfortable environment to express themselves while tackling obstacles they face in daily life.

The powerful women participating in this year’s event have been preparing with 12 weeks of intense training. The schedule is split into three sections starting with the fundamentals of boxing including footwork and offensive and defensive strategies before transferring those skills to situational sparring. They end up preparing for a live-fight situation.

“Boxing is a great way to remind yourself that there is more to life than just you,” says Rebecca Mowat, also known as Northern Rebel. “You box to get strong, mentally and physically, and it reminds you there is always something worth fighting for.”

Show your support by coming out on April 4, from 7 to 11 p.m., at the Crystal Fountain Event Venue at 60 McDowell Gate, Markham. Regular ticket pricing is $120 or you can sponsor a table for $864. All proceeds collected will be donated to the Rock Steady Club at Undisputed Boxing to support and raise awareness about Parkinson’s.

Want to get involved? Contact [email protected] if you want to volunteer with the Rock Steady Boxing Program.

One thought on “Fight the good fight”