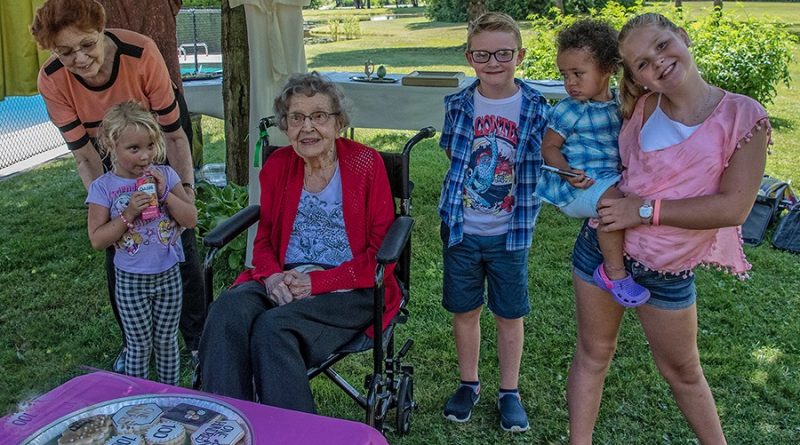 The promise of three scores and 10 is a life well lived with the blessing of those years.

Beyond this is exceptional and truly a miracle to go further than an entire century. Mrs. Don Ratcliff, known to her friends as Pauline, has reached the century mark and is the oldest member at Springvale Church. Close on her heels is another member Mr. Doug Clark age 96.

These folks knew a day’s work and the hard facts of life. The rural life in Whitchurch back in the beginnings of life for Pauline was full of choices. She grew up just outside the edge of the Village of Stouffville on Lot 35 Concession 9 Markham Township. This would mean the family rented a frame single-storey home on the south side of Stouffville Road in 1921, beyond the village boundary.

She was born on July 23, 1920, to Paul and Effie Boadway. Paul Boadway had come to Canada in 1906. He was a Mennonite. Her dad was a school teacher and also ran the Dominion Store on Main St. back in the 1930s.

She started school in the Primary grade and had as a teacher Mr. K. H. Logan. Pauline had the top mark of 98 in June 1926 to be promoted from Primary ‘C’ to Primary ‘B’.

She had top marks and she held her own against her classmates Lillian Phillips, Margaret Forsyth and Edith Borinsky who were in close competition as the top three each report. The principal at the time was Cedric Watson, a very well-remembered teacher at Summitview. Pauline attended the “new” school building which was rebuilt in 1918 facing Main St.

Pauline’s first job was in the Five to Dollar store, which was located in the Ratcliff block on the corner of Main St. Mr. Hugh Bannerman had started the store and had hired Pauline, who was the manager. The store was where Don Ratcliff first took notice of Pauline and he became a frequent customer until he worked up the nerve to ask her out.

Pauline was 18-years-old on her wedding day, which took place on July 27, 1938. Her name was Margaret Roberta Pauline Boadway. She became the wife of Donald Baker Ratcliff. He was the son of Robert Radcliff. The wedding took place at the Mennonite Church (Stouffville Missionary) across from Summitview. Rev. Brubacher conducted the ceremony.

Upon the return from their honeymoon in New York City, they lived on the homestead property, the large red brick residence near the pond entrance to Century Mill Lumber.

All three boys had a connection to the lumber business. With complementary skill sets Paul, Bud and Terry successfully operated building supply and lumber operations in both the Gormley yard on Woodbine Ave, and the yard in Unionville near the tracks on #7 Hwy.

Pauline‘s two grandsons Trevor and Adam were the sixth generation to be actively involved in the lumber business that was in the family for almost 160 years.

Mrs. Ratcliff had a beautiful singing voice. She had her own weekly half-hour radio program called “Rally Echoes.” Her favourite poem, which she read on her program more than once, was “Lord, Forgive Me When I Whine.” This would sum up her attitude about life.

Pauline was a dedicated church worker in Sunday school and was often a guest speaker for special meetings. She is still a dedicated member of Springvale Church. Seven generations of the Ratcliff family attended and have been actively involved in the church’s ministry.

Ratcliff Park, located next to the church, was the location of the beginning of “Youth for Christ” and “Youth-time Radio.” Most residents know this place as the “Youth Center” and in later years it has become part of “Emanuel International.”

The radio broadcast ran from 1950 until 1988 and was aired over 18 stations around the world. Pauline was invited by American first lady Pat Nixon for tea in the White House garden.

Pauline was a positive example, encourager and mentor to many. Over the years she received notes and letters from young people impacted by her involvement in the youth ministry.

“Thanks for everything, Pauline,” said one note. “We really appreciate you. SYFC influenced so many lives which only eternity will reveal and I’m one of them.”

“Pauline, yours was a huge gift of labour and love for those of us who participated,” said another. “For all your efforts, I say a warm thank you.”

One can hardly imagine the things that have happened in 100 years. The countryside has changed. Still, the family is the most important factor to Mrs. Don Ratcliff with the many generations which continue to be added, now with four grandchildren and six great-grandchildren.

“My kids are so important to me… as much as they needed my love and depended on me when they were young… even more I depend on them and value their love and support now in my old age,” Pauline said. “God has blessed me with a wonderful, supportive family… I don’t know what I’d do without them.”

Pauline currently resides at Stouffville Creek Retirement Residence which is located just a few blocks from where she grew up.

Photo: Pauline celebrates her 100th birthday party with family. Her great-grandchildren are the seventh generation of the family to reside in Stouffville area.