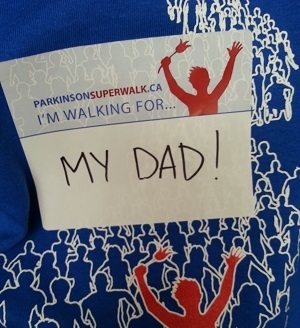 It started nearly three decades ago when a group of seven friends marched from the base of Bathurst St. in downtown Toronto, into North York.

Since that trek in 1990, the event known as the Parkinson SuperWalk has expanded across the country, raising millions of dollars for research into Parkinson’s disease and the 100,000 Canadians living with it.

The SuperWalk will be returning to Markham this year, taking fundraisers on a march through the community on September 10.

The various routes will range in distance from one to three kilometres, though participants can walk as much or as little as they want, depending on time, interest and ability.

This year’s SuperWalk has a national goal of $2 million, which goes towards local support networks within the community, and national research.

Locally, this means easing people with a Parkinson’s diagnosis—and their family members—into a support system.

“We prioritize making sure that when someone in Markham or anywhere in Canada receives a diagnosis of Parkinson’s… that there is somewhere they can turn to,” said Jon Collins, the associate director of events and partnerships for Parkinson Canada.

The Markham walk, one of nearly 70 across the country, benefits the existing Markham support group for those impacted by the degenerative central nervous system disease.

One annual participant in the walk is Mike Zegers, whose father, Marinus, battled Parkinson’s for over 15 years.

“One of my father’s great wishes was that future generations, including his children and grandchildren, would live to see a cure—and not face the debilitating consequences of the disease, as he did,” Zegers said. “Contributing to Parkinson Canada through SuperWalk is my attempt to help turn that wish into a reality.”

Parkinson Canada spends anywhere from 20 to 25 per cent of its annual budget on research, with an aggressive plan to increase research spending to $10 million by 2035. The goal of finding a cure for the disease is one that Collins says gives hope not only to the families who work with the organization, but him as an organizer.

“I personally value working on SuperWalk because we see it as a way for people to connect,” he said. “It’s a public expression of hope—of coming together to know that we’re not alone, and of making a collective difference in the lives of Canadians living with Parkinson’s disease.”

Whether it’s the charity’s research or its local programming—ranging from guest speakers to educational resources to dance classes—Collins said every dollar raised works towards the broader mission.

“Our vision is of a better life today for Canadians living with Parkinson’s, and a world without Parkinson’s tomorrow,” said Collins.