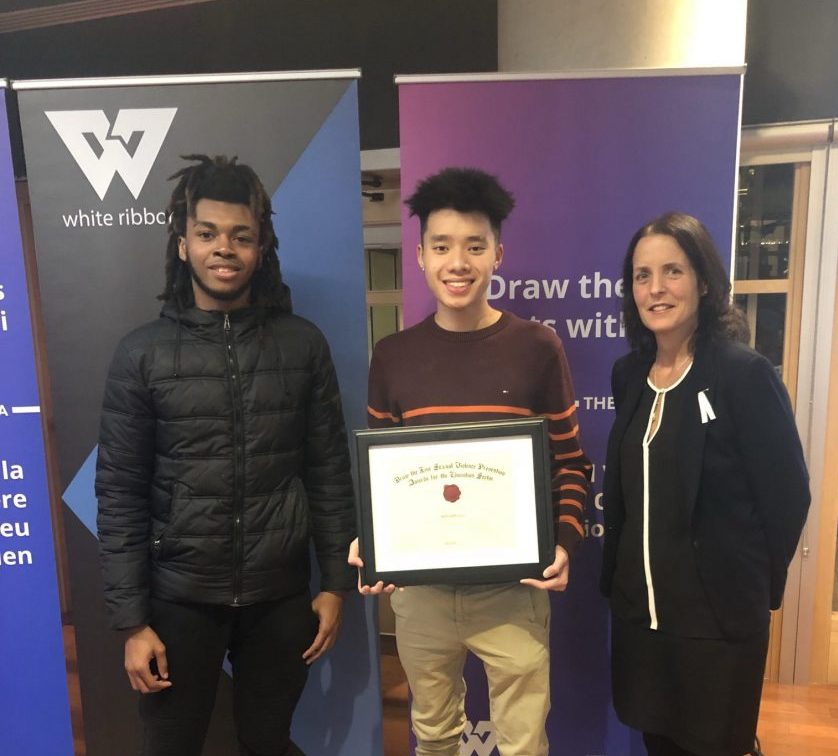 A local high school student has been recognized for his leadership in promoting the “Draw the Line” campaign to fellow students.

Indira Naidoo-Harris, Ontario Minister of the Status of Women, presented Kenneth Luu with an award at a recent event presented by White Ribbon, the world’s largest movement of men and boys working to end violence against women. The award recognizes students, educators, and other members of the community for their outstanding sexual violence prevention efforts.

Luu, a student leader at Milliken Mills High School (MMHS), organizes activities that use “Draw the Line” resources to start conversations and increase peer awareness about the issue of sexual violence. He exemplifies how everyone has a role to play to prevent sexual violence, including men and boys. As well, he has inspired several of his peers to join the Healthy School team.

“It is in these leadership moments that roles change, and I was taking a bigger role with the Healthy Schools team,” said Luu. “I rallied up about 20 new people to join, including males, as our committee was predominantly made up of females, and we had work to do with a larger group. It is truly an honour to be selected as the recipient of this prestigious award.”

This year, he continues his work with the campaign to further educate the school community and to capture a larger student voice. His committee will also be teaching Grade 9 health classes using “Draw the Line” resources. Luu hopes to start conversations with the Grade 9 students, to educate and share what he has learned.

Staff and students at Milliken Mills are happy with his leadership.

“Kenneth exemplifies how everyone has a role to play to prevent sexual violence, including men and boys,” said Liana Williams, Healthy Schools staff advisor at MMHS.

Starting in 1991, White Ribbon asked men to wear white ribbons as a pledge to never commit, condone or remain silent about violence against women and girls.

For more information go to www.whiteribbon.ca