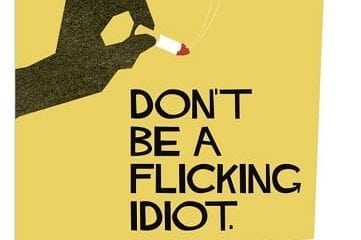 Data shows that Parkdale, over a five-year period, had more fires started from careless smoking than any other area of Toronto. Many of these fires occurred on balconies as a result of tenants discarding their lit cigarette butts by throwing them from their balconies.

The campaign includes transit shelter posters, restobar (combined restaurant and bar) ads, posters on construction hoarding sites in the Parkdale neighbourhood, as well as geo-targeted social media and features two themes. The first campaign design depicts a hand holding a lit cigarette with the tagline “Don’t be a flicking idiot … tossed butts start fires.” The second design shows a teddy bear on fire with the tagline “Kill your butts, not your neighbours … tossed butts start fires.”

The advertising campaign will continue through November 11. A public education campaign will be carried out in conjunction with the ad campaign that will include firefighters visiting businesses and residents to convey the message that cigarette butts need to be completely extinguished before being discarded.

“With this ad campaign, we’re reminding residents that we all are responsible for keeping each other safe from fire,” said Fire Chief and General Manager Matthew Pegg. “Our message is simple. Make sure your cigarettes are completely extinguished before you discard them, and discard them properly.”

“Parkdale is a tight-knit community that is known for being unique, colourful and diverse,” said the Councillor of Ward 14. “What Parkdale should not be known for is the neighbourhood with the most fires due to careless smoking. This Fire Services campaign aims to change that fact and I’m confident we can reduce the number of fires started by improperly extinguished cigarette butts.”

To help highlight this issue, generic fire prevention messaging is being augmented with specific messaging to target residents who live in the fire-prone area of Parkdale. This campaign is Fire Services’ first to focus on a specific area and target audience in an effort to deliver relevant, impactful and behaviour-changing communications. A public education risk assessment that included risks, geographic profiles, demographic profiles and marketing profiles aided in message targeting.

Through this targeted ad campaign, Fire Services encourages Parkdale residents to understand the true cost of careless smoking and persuades them to adopt safer smoking habits. More information is available at toronto.ca/smokingsafety.

Fire Services delivers public education programs to the residents of Toronto who are most at risk in conformance with the Fire Protection and Prevention Act. Fire Services typically delivers messaging to children, seniors and single-family-dwelling owners.