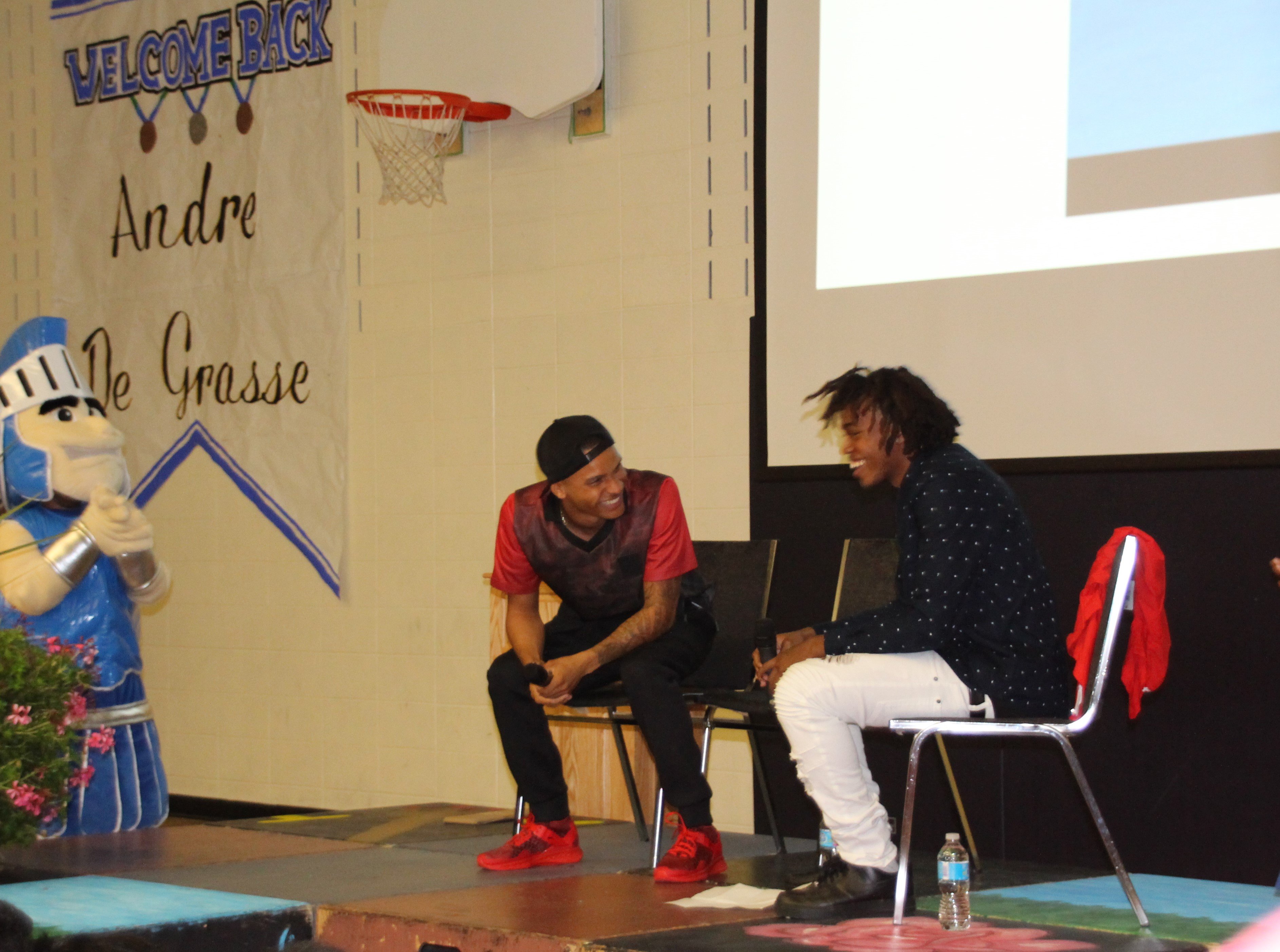 As you can imagine, Andre De Grasse, multiple Olympic medalist and Markham hometown hero is a busy guy. But despite being pulled in many directions since becoming a household name in sport, he made sure one direction he still wants to go was back to hometown, Markham.

But while he will be at the head of a parade this Sunday afternoon that starts at the Varley Gallery on Main St. Unionville and goes to the Pan Am Centre at the foot of the street where he will be feted along with other local Olympians, there was another stop he needed to make first.

That stop saw him sitting back in a familiar place today – Milliken Mills High School.  But instead of being a one of the many wide-eyed kids watching the stage in the packed gym, he was up on it, being introduced and interviewed by current students.  And while it was obvious from the buzz in the room that De Grasse was, to say the least, an inspiration to the young fans in attendance, they weren’t the only ones excited to be there.

When asked what motivated him to be so good, De Grasse answered “(being) right here. You motivate me,” he said to thunderous applause.  The young sprinting sensation seemed to revel in the opportunity to visit the staff and students in a place that he was not far removed from.

De Grasse was quick to heap praise on the people who helped him reach the level he has in sport including his first club coach Tony Sharpe, but also gave a shout out to the teachers and friends from the school. In return the young star doled out memories and advice to young fans to stay true to themselves, be patient, don’t be too worried if they didn’t know what they wanted to be yet and remember that while sport is important, so too was education, pointing out that he too is continuing to pursue a Sociology degree while he continues to train.

One brash student asked to race the Canadian champ.  “let’s go right now. Let’s do it,” he laughed before the student acknowledged “I’ll probably get crushed but it’s OK.”

“No, I’ll give you a head start,” said De Grasse to gales of laughter.

But while De Grasse did indeed to go out to the track, it wasn’t to sprint against the new crop of young guns, but to help launch the school’s own tribute to another famous Canadian running icon, Terry Fox. Leading a group around the track, De Grasse helped jump start the Milliken Mills Terry Fox Run, one of many such events that are held throughout the area including the Main public event Sunday September 18.