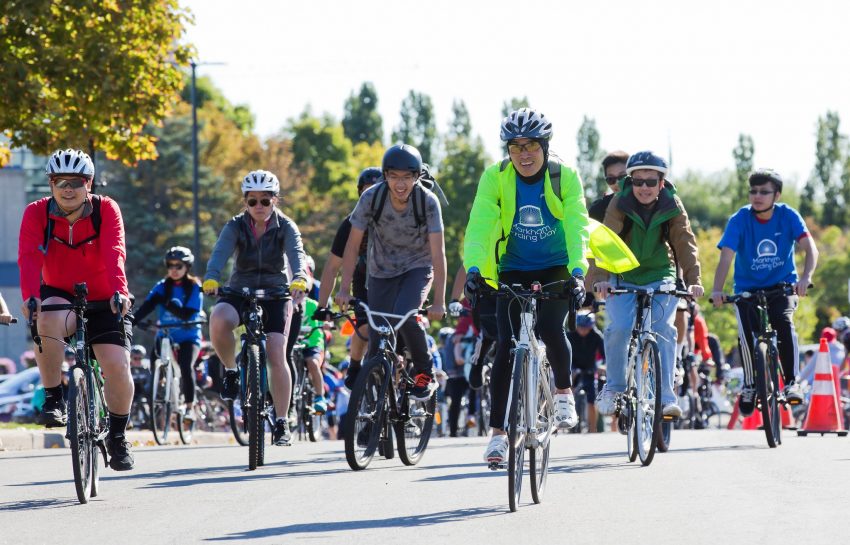 On your mark. Get set. Pedal away!

With kilometres of cycling paths being added to the streets of Markham each year, a task force dedicated to promoting cycling is hoping an event this month might get Markhamites hopping on their two-wheelers.

The Cycling and Pedestrian Advisory Committee, which reports to Markham’s city council, is hosting the third annual Markham Cycling Day on September 24, boasting a robust selection of events and activities—including the coveted Tour de Markham routes.

Children between ages three and 10 can take part in the Giro Bicycle Races while grown-ups can tackle one of three lengths of ‘tours’—10, 25, or 50 kilometres.

The tours kick off from the Markham Civic Centre, which will play host to a number of events throughout the day.

Cycling and Pedestrian Advisory Committee vice-chair Peter Miasek said he hopes the event will remind people how fun cycling can be and draw attention to some of the newer infrastructural developments that he says make cycling in the city both easier and safer.

“Our feeling is that we just want to expose as many people as possible to cycling,” said Miasek. The event is structured as a tour rather than a race to make it about individuals and their exploration of biking in Markham, rather than competition.

Bikes can be sport implements, but also methods of transportation, Miasek noted, hence there’s such a wide range of participants in the event, which he expects to bring out about 1,000 participants and spectators.

Showing off cycling is just one part of the equation, however. Miasek also wants people to see how many places there are in Markham that are cycling-friendly.

“We have a growing amount of infrastructure,” he said. “From trails we’re getting like the Rouge Valley Trail or the cycle tracks on Highway 7. A lot of people, surprisingly, are not aware of those.”

This makes it not just a hobby, but an effective way to travel, he said.

“Look, it doesn’t take that long to cycle, five, seven or eight kilometres,” he said. “It doesn’t take that much time. Cycling is actually a pretty efficient way to go around for most types of distances. It is just a fun activity that can be done safely on this new infrastructure. And it’s a healthy activity.”

Miasek said a problem with the previous two Markham Cycling Days was that after cyclists completed their tours, they went home. This year, organizers are giving participants a free lunch back at the Markham Civic Centre to encourage mingling, camaraderie, and perhaps even some learning.

“We’d like people to come back to the Civic Centre—get your free lunch, take a look at some of the booths that are there and learn a little bit more,” he said. “There’s a lot of other pieces beyond the tour and the races. We’re offering literature, training, an obstacle course, and more things like that.”

He stressed that it’s an event for those of all ages—but also all ability levels.